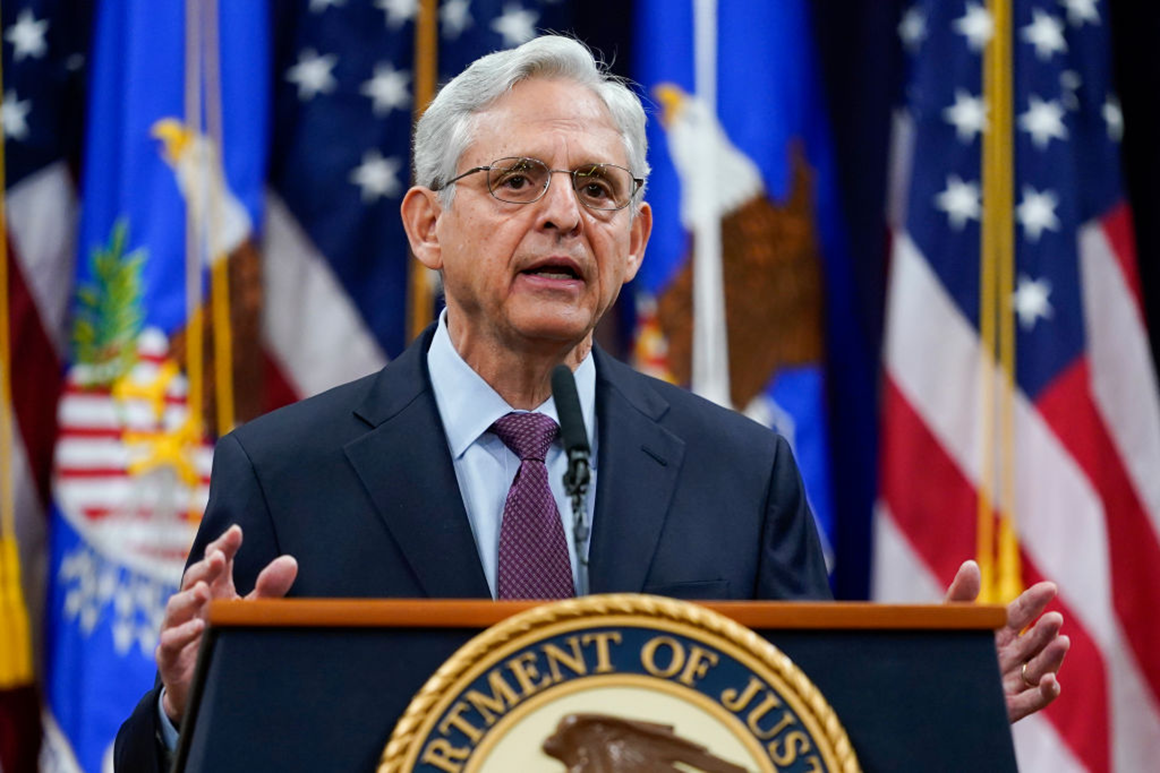 Attorney General Merrick Garland on Wednesday pushed back against criticism of the Justice Department’s response to the Jan. 6 attack, arguing that prosecutors are methodically building cases against the most serious offenders.

Speaking via video link to Justice Department employees nationwide, Garland also suggested that those who did not play a physical role in the insurrection could face charges over their involvement.

“The actions we have taken thus far will not be our last,” Garland said. “The Justice Department remains committed to holding all January 6th perpetrators, at any level, accountable under law — whether they were present that day or were otherwise criminally responsible for the assault on our democracy. We will follow the facts wherever they lead.”

In recent weeks, Democrats and others on the left have expressed frustration with Garland and the Justice Department over the lack of any outward sign that investigators are pursuing potential criminal cases against former President Donald Trump or top allies who worked closely with him in the days leading up to the Jan. 6 violence.

“Merrick Garland has been extremely weak, and I think there should be a lot more of the organizers of Jan. 6 that should be arrested by now,” Rep. Ruben Gallego (D-Ariz.) said in an interview on CNN Tuesday. “You have an attorney general who is feckless and has not been helpful in terms of preserving our democracy.”

Some judges and defense attorneys have also noted the incongruity between swift and certain punishment for the “pawns” who breached the Capitol while more powerful actors remain unpunished.

Instead, most of the public focus on Trump’s actions in connection with Jan. 6 has come from the House’s select committee, a panel tasked by Speaker Nancy Pelosi with recommending legislative fixes to prevent a future assault on the Capitol and the transfer of power.

On Wednesday, Garland seemed to acknowledge the calls for such scrutiny and action, and he suggested investigators were probing the funding of groups involved in Jan. 6, but he stopped short of promising charges against any prominent figures or others who did not set foot in the Capitol that day.

“There cannot be different rules for the powerful and the powerless,” Garland declared.

Garland noted that, so far, more than 725 people had been arrested in connection with the Jan. 6 events at the Capitol. Almost half face felony charges, ranging from assaulting police officers with dangerous weapons to obstructing Congress’ tally of the electoral votes. However, most of those arrested face only misdemeanor charges, such as entering the Capitol without permission or disorderly conduct.

Most sentences to date have been light, according to a POLITICO review, but the misdemeanor cases have proceeded faster than most of the more serious cases.

While several dozen defendants have received only probation, home detention or a combination, a few have gotten significant prison time. The stiffest sentence yet went to Florida resident Robert Palmer, who got a five-year, three-month prison term last month after admitting to assaulting police by swinging a pole at them as well as throwing a plank and a fire extinguisher in their direction.

Garland urged patience, noting that most broad criminal investigations involve reaching deals with minor players first, then progressing to the more significant ones.

In his nearly half-hour-long speech delivered a day before the first anniversary of the assault on the Capitol, Garland sought to fend off some of the criticism of the Jan. 6 probe by pointing to other aspects of the Justice Department’s work to defend democratic freedoms. He noted that prosecutors had brought a record number of threat cases, often against individuals accused of terrorizing members of Congress or of the media.

The attorney general also noted the department’s extensive efforts to challenge voting restrictions being imposed in a series of Republican-led states in the wake of Trump’s false claims of widespread election fraud in 2020.

While Garland recited some of the most disturbing and jarring details of the attack, it was striking that he eschewed words that have become common in public discussion of the assault, choosing not to call it an insurrection or act of sedition. Notably, while the Justice Department has said in court that the event “certainly” qualifies as domestic terrorism, the attorney general did not use that term Wednesday.

Garland is preternaturally cautious, but has been particularly circumspect in his comments about the Jan. 6 investigation. Just days after he was confirmed last March, judges slammed the Justice Department over a prosecutor’s comments in a “60 Minutes” interview, suggesting that “seditious conspiracy” charges would soon be filed against some Capitol riot defendants. More than eight months later, no such charge has been brought.