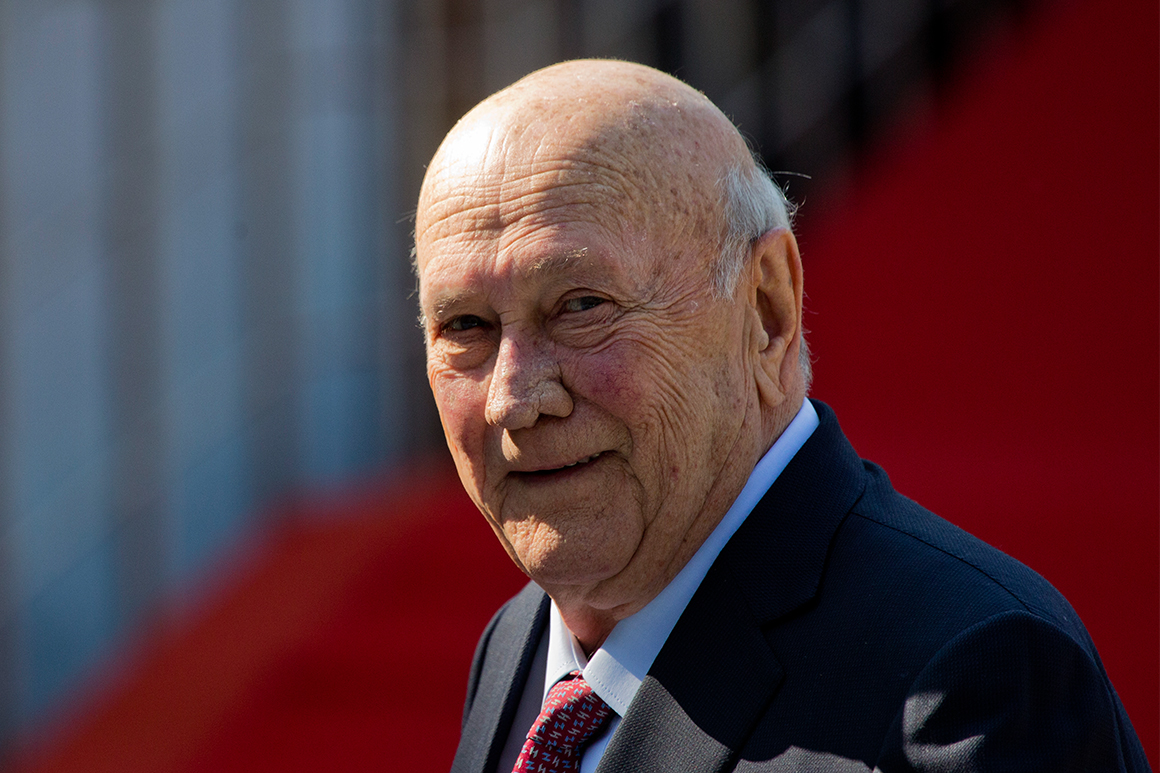 In a video message recorded shortly before his death, the last white president of South Africa, Frederik Willem de Klerk, said he was sorry.

“I apologize for the pain and indignity that apartheid has bought to persons of color in South Africa,” said the 85-year-old statesman, his face drawn and gaunt. He was dying from cancer and spoke with the rehearsed precision of someone who knew this was his last chance to shape his legacy.

“My views changed completely,” he explained. “It was as if I had a conversion, and in my heart of hearts realized that apartheid was wrong.”

When he died in November, de Klerk was remembered by many outside South Africa as the man who dismantled apartheid, a brave maverick who destroyed one of the world’s most racist governments from within. International obituaries led with the famous shot of de Klerk and Nelson Mandela in 1994, grinning, their hands clasped together and flung towards the sky.

But in South Africa, de Klerk’s death, and his deathbed apology, were met differently. “Thank you God,” tweeted Julius Malema, the leader of one of South Africa’s largest opposition parties. Malema, like many South Africans, won’t remember de Klerk as the president who helped end apartheid. For them, this was a man who presided over some of the system’s most violent years prior to his conversion. And he helped engineer a post-apartheid society in which many of those brutalities went unanswered for, while the schisms of wealth and opportunity that apartheid created not only persisted, but deepened.

De Klerk’s decision to begin the negotiations that ended apartheid “should not be read as a Damascene conversion to the principle of black majority rule,” wrote Christi van der Westhuizen, a South African sociologist and race scholar, shortly after the president’s death. It was, rather, a calculated act of pragmatism. South Africa in the 1980s was an isolated, racist nation with which few were willing to work. De Klerk saw the writing on the wall. He also knew that if he negotiated, he could help control what came next, preventing white South Africans from being stripped of their wealth and ensuring that many of apartheid’s crimes went unpunished.

“Mr. de Klerk was by no means the great emancipator,” wrote Mandela in his autobiography, Long Walk to Freedom. “He did not make any of his reforms with the intention of putting himself out of power. He made them for precisely the opposite reason: to ensure power for the Afrikaner in a new dispensation.”

When de Klerk was called before South Africa’s Truth and Reconciliation Commission, he claimed he was “as shocked as anyone else” to hear that the apartheid government had ordered the abduction, torture and murder of liberation activists. “I have never condoned gross violations of human rights and reject any insinuation that it was ever the policy of my party or my government.”

Yet his actions had an air of paranoia. Just before he left office, de Klerk ordered the destruction of tens of thousands of pounds of government records — a quantity so vast he had to borrow a local iron smelter’s incinerator when government furnaces became overloaded.

In the days after de Klerk passed, I heard many South Africans say his death represented a chance to turn the page on the past. Indeed, the country remains in many ways in the shadow of apartheid. South Africa is the world’s most unequal country. Its richest 3500 people own more than the poorest 32 million; white South Africans still have three to four times the average income of Black South Africans. This is not de Klerk’s legacy alone, of course, but it is apartheid’s.

In the seven years I’ve lived here, I’ve noticed that Western readers love stories about the redemption of white South Africans and the forgiveness of Black South Africans (think Morgan Freeman as Mandela, cheering South Africa’s nearly all-white rugby team to World Cup victory in Invictus). I think these stories appeal to a certain moral certitude common among white people in the United States as well as South Africa. Yes, the past was brutal and racist, it seems to say. Yes, that may have been our fault. But look, we are moving on.

As police shoved back protestors trying to disrupt de Klerk’s state memorial earlier this month, president Cyril Ramaphosa stood at the lectern inside, urging the country to move on.

“FW de Klerk was a man whose life was bound up in the fortunes of our country, its crises and its triumphs, its complexity and its contradictions,” he said. “Let us release him to rest.”