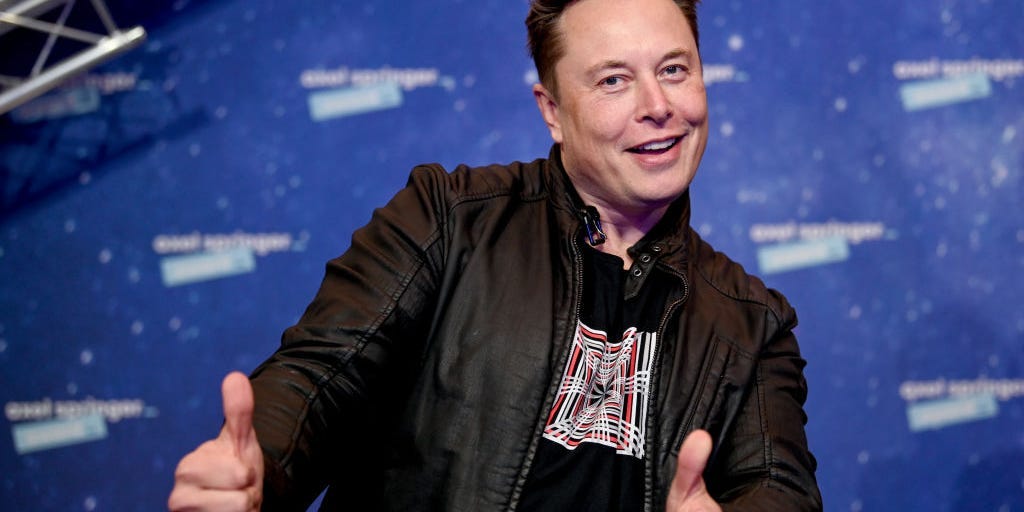 Elon Musk was dubbed the Person of the Year by Time magazine, in part because of his impact on financial markets.

The Tesla chief has garnered 67 million followers as well as a reputation for moving markets and making headlines with his tweets, which are often merely jokes.

In November alone, numerous tweets, such as spats with US senators and a supposed one-star review of JPMorgan, caught the public eye.

Here’s a roundup of a dozen of his most influential market tweets — one for each month of the year.

On January 26, near the height of GameStop mania in which shares of the ailing retailer soared past $300, Musk shared a simple tweet: “Gamestonk!!” He linked to Wall Street Bets, the widely followed subreddit that rallied behind GameStop.

He sent a bevy of tweets related to dogecoin that led to rallies in the meme token, whose mascot is a Japanese shiba inu dog. A Twitter poll from February 5 that read, “Dogecoin to the Moooonn,” sent the cryptocurrency soaring 35%.

In March, Musk briefly announced plans to sell a non-fungible token, or NFT, and then quickly backed off. More notably though, he said people could begin buying Teslas with bitcoin. The price of bitcoin rose after the tweet.

He referred to himself as the “dogefather” in an April 28 tweet that preceded his appearance as the host of “Saturday Night Live.” That tweet, alongside endorsements from billionaire investor Mark Cuban, sent dogecoin as much as 30% higher. Musk’s appearance on SNL, though, led to a dogecoin dip.

Just two months after announcing Tesla would accept bitcoin, Musk reneged on the plan. In a series of tweets, he explained his concerns over the energy usage and impact on the environment related to processing transactions and mining bitcoin. The U-turn triggered a slump in Tesla stock and the digital asset market.

Musk caused the price of bitcoin to jump in June after the he tweeted the EV maker would begin accepting bitcoin once “there’s confirmation of reasonable (~50%) clean energy usage by miners with positive future trend.”

His sway over the markets began waning in July and he stayed away from market-moving tweets for the most part. He did, however, sneak in a Matrix meme that read “dogecoin is money.”

After Cuban told CNBC that dogecoin is the best cryptocurrency as a medium of exchange, Musk chimed in on Twitter to say, “I’ve been saying this for a while.”

But in September, Musk said dogecoin fees would have to drop for it to become a more feasible payment option. The tweet came after AMC CEO Adam Aron toyed with the idea of accepting dogecoin as payment.

Shiba inu, the self-proclaimed “dogecoin killer,” began an epic surge in October after Musk tweeted a photo of his new Japanese pup named “Floki.” He later revealed he didn’t have any crypto holdings in shiba inu — just in bitcoin, ether, and dogecoin.

Tesla stock tumbled in November after Musk posted a Twitter poll asking if he should sell 10% of his stake because “much is made lately of unrealized gains being a means of tax avoidance.” Of the 3.5 million people who voted, nearly 60% voted yes.

In December, he continued to offload Tesla shares to reach his 10% goal and said he would pay $11 billion in taxes. In Time’s Person of the Year article, he said he doesn’t actually have an effect on markets, though. “Markets move themselves all the time, based on nothing as far as I can tell,” he said.