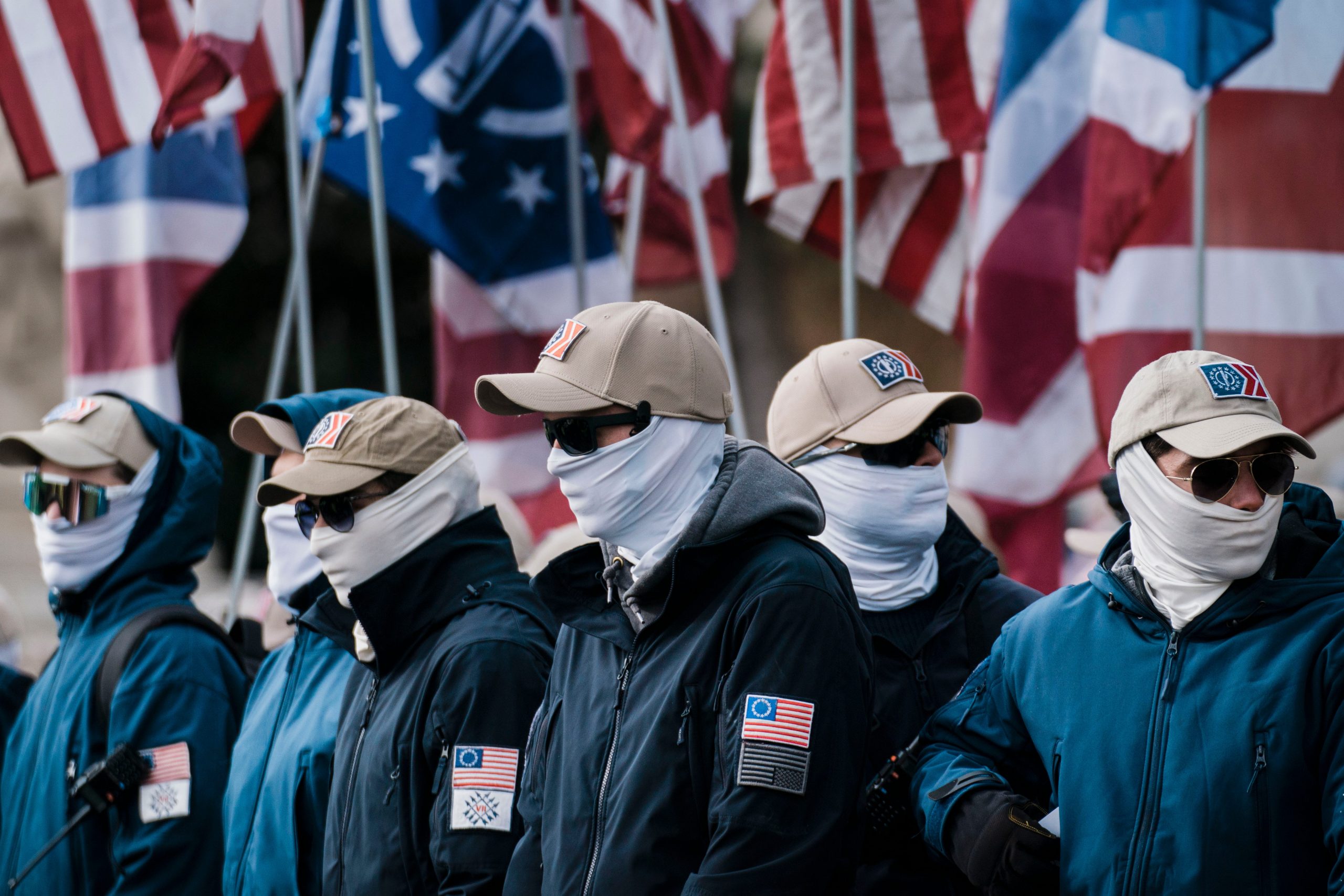 Members of the right-wing group, the Patriot Front, as they prepare to march with anti-abortion activists during the 49th annual March for Life along Constitution Ave. on Friday, Jan. 21, 2022 in Washington, DC.

Dozens of far-right Patriot Front members chose the Fourth of July weekend to march through downtown Boston on Saturday.

In videos posted on social media, the masked demonstrators march to a drum beat, carrying flags with the group’s logo and shields, and wearing their signature khaki pants, navy polo shirts, with baseball caps.

Most marchers had their faces covered with sunglasses and white cloth coverings around their noses and mouths.

The demonstration was about 100-strong, according to the Boston Herald.

The Anti-Defamation League describes Patriot Front as a white supremacist group who are focused on preserving America’s identity as a European-American one.

“Patriot Front marching alongside the freedom trail on 4th of July holiday weekend is an insult to all who fought for freedom, equality, justice,” Robert Trestan, the director for the ADL New England, said on Twitter

Patriot Front is known to stage marches to coincide with significant American holidays, such as the Fourth of July.

The marchers arrived in the area around 12:30pm and began unloading shields and flags from a truck, according to The Boston Herald.

Along with flags with their logo, many carried Betsy Ross flags, which have just 13 stars in a circle to represent the original US colonies.

Some carried American flags upside down, which conveys their belief that the nation is in distress.

In one of the videos posted on social media, a Patriot Front speaker can be heard addressing the crowd with a megaphone.

“Our current state neither represents the people, the nation, or virtue. They rip children from wombs and sell the ground beneath your feet to foreigners and then they tell you its justice,” the man says.

At one point, suspected members of the group clashed with a Black man, seen in photographs taken by The Boston Herald. Police received a report of one adult Black male injured during a confrontation, per the paper. Michelle Wu addresses the press after she is sworn-in as Mayor, becoming the first woman and first person of color elected to the office, in Boston, Massachusetts, U.S., November 16, 2021.

Boston Mayor Michelle Wu addressed the group in a tweet: “To the white supremacists who ran through downtown today: When we march, we don’t hide our faces. Your hate is as cowardly as it is disgusting, and it goes against all that Boston stands for.”

Patriot Front broke off from the white nationalist group Vanguard America after the notorious “Unite the Right” rally in Charlottesville, Virginia, in 2017 that resulted in the death of counter-protester Heather Heyer.

The group often stages marches through cities around the country, frequently appearing at anti-abortion events.

Last month, 31 extremist Patriot Front group members were arrested outside an Idaho Pride event after being seen loading into a U-Haul looking like “a little army.”