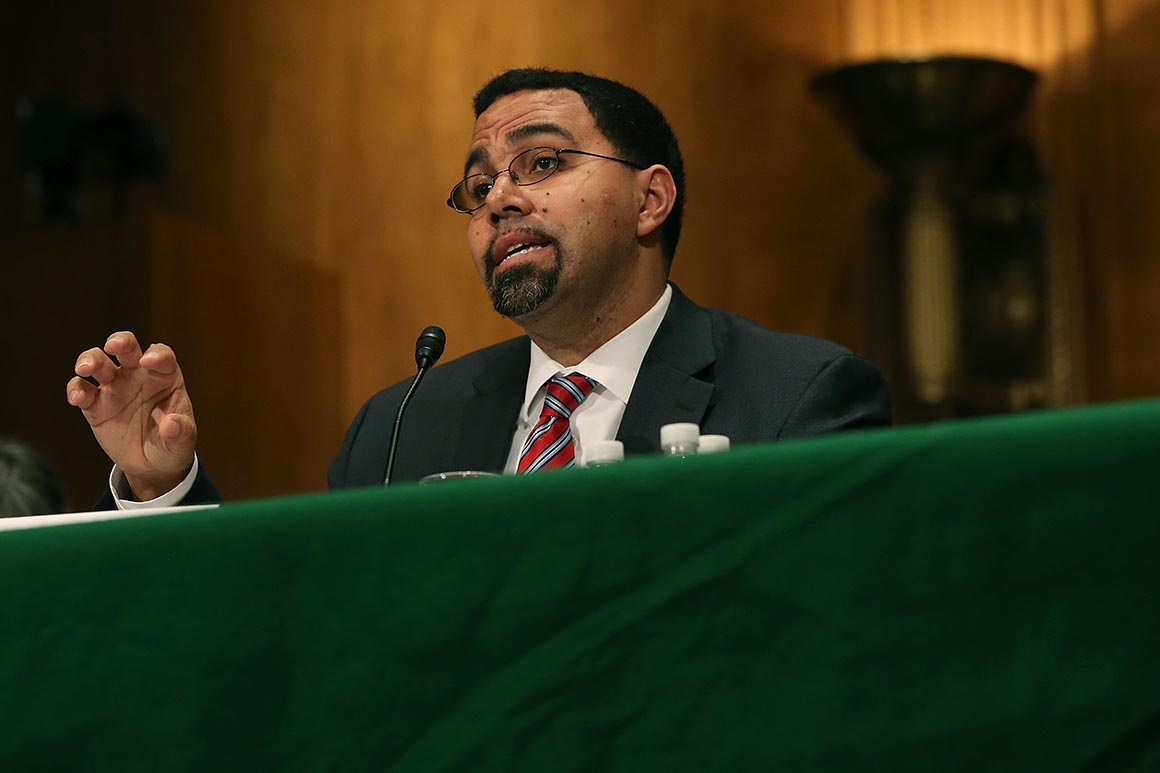 Maryland could be the best opportunity for Democrats to flip a governorship anywhere in the country next year. But first, the party has to navigate a crowded, diverse and potentially expensive primary to find their nominee.

Five of nine Democrats who have declared as candidate to succeed term-limited GOP Gov. Larry Hogan are people of color, bolstering the state’s chances it could elect its first non-white man as governor.

“This is a potentially historic election,” former Education Secretary John King said in an interview with POLITICO. “There’s a huge opportunity for great representation and leadership in Maryland and nationally.”

Looming over the Democratic primary is a political environment likely benefiting Republicans — amplified by the GOP’s victory in neighboring Virginia last month. One of the Democratic hopefuls told POLITICO he thinks 2022 could be the most difficult election for his party in a half-century.

The roster of candidates includes King, who is Afro-Latino; former Prince George’s County executive Rushern Baker and author Wes Moore, who are both Black; former DNC chair Tom Perez, the son of immigrants from the Dominican Republic; and former Obama administration official Ashwani Jain, who is Indian American.

The demographics of the state are a key factor: Maryland is among the most racially diverse states in the country, and white people make up only roughly 4-in-10 voters in the Democratic primary.

According to the Census Bureau’s Diversity Index — a formula that measures the probability that two people chosen randomly will be from different ethnic or racial groups — Maryland saw the largest gain of any state in the U.S. since 2010.

Moore, the only one of the Democratic candidates who lives in Baltimore, thinks the party should lean into the “history-making” nature of its field.

“It’s not lost on me that we’ve only had two African Americans elected as governor in this country’s history,” Moore said.

“The reason that people become so excited about the history-making fashion of this is … there is hope that [Maryland] can cross this hurdle is something that people think is real in our campaign,” said Moore, a first-time political candidate and former CEO of the anti-poverty organization Robin Hood, who has picked up endorsements from several state and local lawmakers as well as two former state party chairs.

Staffers and candidates in the state caution that the race is still in its infancy. No candidate has launched a TV ad yet for the late-June primary, and candidates can’t file to officially get on the ballot until mid-February. Operatives point to a Jan. 20 campaign finance report deadline as an early first barometer for the seriousness of candidates.

Party leaders in the state project optimism despite the crowded field, with no clear-cut frontrunner at this early stage. “I think it actually helps the party because it brings in a variety of perspectives,” said Yvette Lewis, the state Democratic Party chair. “That speaks to who we are as Democrats.”

Yet recent history has not been kind to Maryland Democratic gubernatorial candidates, either. After Martin O’Malley scored back-to-back terms in 2006 and 2010, Democrats lost subsequent governor elections to Hogan.

He trounced former NAACP CEO Ben Jealous in 2018, in a year that was otherwise a wave year for Democrats nationally. Four years earlier, Hogan shocked pundits by toppling a Democrat Anthony Brown, who was O’Malley’s lieutenant governor and seen as the favorite to be the state’s first Black governor.

“In 2014, we were coming off of an eight-year run of almost annual tax increases,” said Brown, who is now a member of Congress and is running for state attorney general in 2022.

While he feels this was the right approach in the years immediately following the great recession, Brown says a tax weary electorate took a chance on Hogan, who painted himself as a Republican businessman who would roll back taxes.

“So a personal narrative is going to be important in 2022. But we’re also going to have to make sure that we are speaking directly to issues that Marylanders are focused on,” Brown said. “And that means speaking to pocketbook issues.”

Gansler, the former state attorney general who is running in the more moderate lane of the gubernatorial primary, said that Democrats’ recent losses in the state — coupled with an expected tough political climate for the party nationally — are why the party should nominate a candidate best suited to win the general election.

“We have the most Democratic state in the country … yet we lost three of the last five elections,” said Gansler, who also finished second in the 2014 primary. “Looking forward to next year, we’re staring at headwinds of what appears to be the biggest Republican year in the last 50 years.”

“The idea that somebody … that might come out of the Democratic primary that’s never held a political office and then try to take on the Hogan machine in an incredibly Republican year is myopic,” he said.

Baker, who finished second in the Democratic primary in 2018, is also leaning on his tenure in government as the selling point this cycle. He ticked off three issues around which he’s framing his campaign: health care, crime and education.

Asked about his loss to Jealous in the 2018 primary, Baker said his campaign was too focused on his home base in majority-Black Prince George’s County, at the expense of voters in and around Baltimore City, who didn’t get a chance to know him. Of Maryland’s 24 counties, Baker carried only Prince George’s and neighboring Calvert, and was blown out in other parts of the state.

“I tried to run a race where everyone told me — I was in the lead at that time — and everyone said, ‘Here’s what you do: You play it safe.’ And that’s a mistake,” Baker said.

And Franchot, who has been the state’s chief financial officer since 2007, is also leaning on his campaign experience. “The path to victory is that I have a base, and I have four statewide elections under my belt,” he said. “The rest of the field is fractured by very impressive, well-financed folks, but the path to victory is pretty clear.”

He, too, sold himself as a strong general election candidate, and said he had “no regrets, no doubts at all,” about his non-endorsement in the 2018 race — where he declined to back Jealous against Hogan, whom he has praised — and any potential blowback this year.

For his part, King is leaning into his bailiwick: education. To bolster his liberal bonafides, then-President Barack Obama’s final education secretary launched a digital ad this month challenging national Republicans’ characterizations that critical race theory is bigoted and racist.

The framework of the theory, developed by Black legal scholars in the 1970s, is based on the idea that race and racism are ingrained in American institutions since slavery and Jim Crow. It’s become a hot-button issue in recent elections as some Republican-backed state houses have sought to ban its teaching in schools, even in jurisdictions where it’s not part of school curricula.

“Some far-right politicians want to erase my story,” says King says in the ad, who can trace his family lineage back to slavery in Gaithersburg, in now-suburban Montgomery County.

Perez — the former DNC chair who also served as both the federal and state labor secretary and recently secured the endorsement of House Speaker and Baltimore native Nancy Pelosi — says he plans to lean into unions for support.

The race also includes two other candidates: Nonprofit executive Jon Baron; and Jerome Segal, who unsuccessfully tried to primary Democratic Sen. Ben Cardin in 2018, both of whom are white.

Maryland’s demographic shifts may be a boon for Democrats heading into 2022. The state saw jumps in its Asian and Hispanic populations, while the white population fell to 47 percent in 2020, down from 55 percent a decade earlier.

Black residents still make up the largest minority population, but their 29 percent of the state population remained unchanged from the 2010 census.

For Maryland Republicans seeking to retain the control of the governor’s mansion, the state’s Black population holding steady could be seen as a positive.

Mileah Kromer, the director of the Sarah T. Hughes Center for Politics at Goucher College which conducts polling in the state, says that Hogan was able to attract about 30 percent of Black voters in 2018.

But it’s not clear his brand of moderate Republicanism is transferable to other candidates.

“There has not been any evidence of Hogan coattails in the state,” Kromer told . “So that leads to the discussion of whether Hogan is a unique entity and whether that sort of brand can be run on again.”

Republican Kelly Schulz, the state commerce secretary, could make history of her own by becoming the first woman to serve as Maryland governor.

She is facing state Del. Daniel Cox, who has the backing of former President Donald Trump. Schulz sidestepped questions about Trump’s endorsement and its effect on the race, while highlighting Hogan’s support of her candidacy. She cast her candidacy as one of continuity of the popular outgoing governor’s tenure.

“My campaign is the only campaign that is going to continue to move Maryland in the direction that Marylanders are very, very comfortable with right now.”