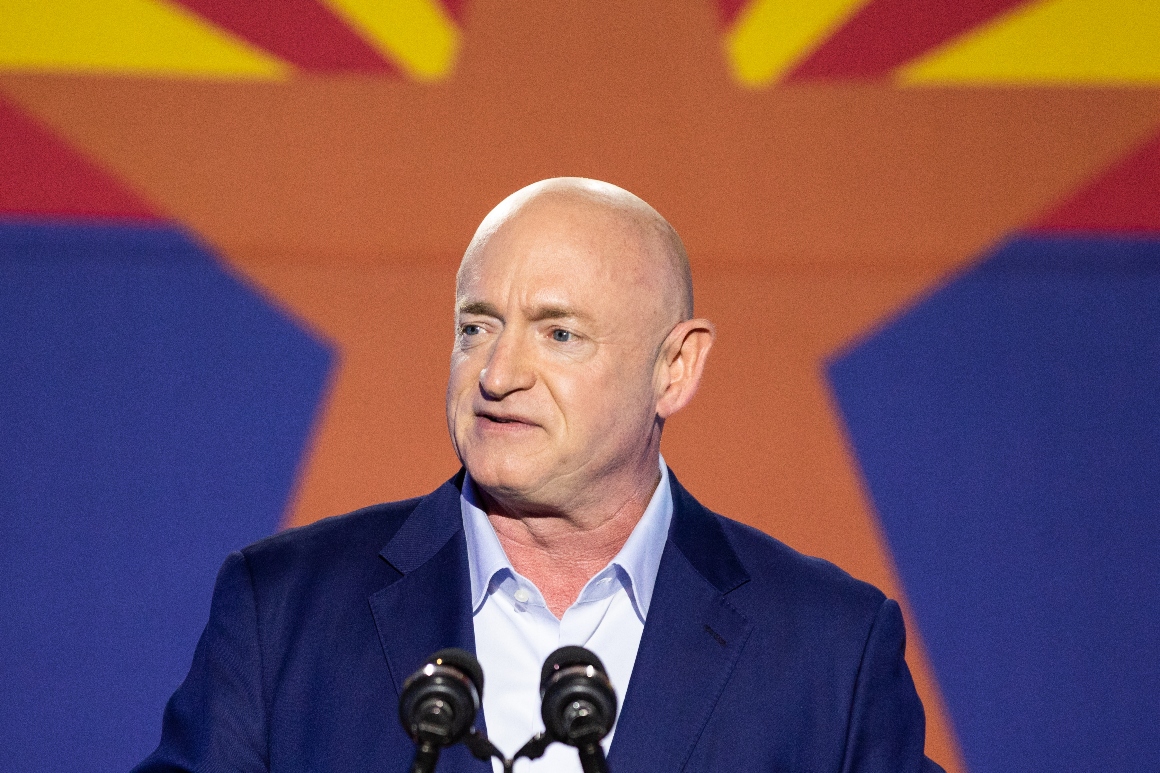 A Democratic senator from Arizona is still not sold on changes to the filibuster. And it’s not Kyrsten Sinema.

Mark Kelly is not yet committed to a change in the Senate rules that would allow elections reform legislation to pass by a simple majority. A centrist who is up for reelection in November, Kelly said Monday he is still undecided just days before he may have to vote on proposals to weaken the filibuster.

“I’ve never been part of an organization where it’s really, really hard to do things. So if there’s a real proposal, I’ll take a look at it and evaluate it based on what’s in the best interests of the country,” Kelly said. He said he has yet to see what, exactly, he would vote on and that the proposals Democrats have discussed change “almost weekly.”

Sinema (D-Ariz.) and Sen. Joe Manchin (D-W.Va.) are the source of most liberals’ frustrations these days, with both publicly rebuffing changes to the Senate’s 60-vote threshold. But it’s not like Senate Majority Leader Chuck Schumer starts a pivotal week — focused on changes to the very fabric of the Senate — with 48 iron-clad votes for a particular filibuster reform.

Kelly is one of a handful of Democrats still weighing what to do about the party’s drive to allow sweeping federal elections legislation to evade the Senate’s 60-vote threshold. And the range of views and Democratic hesitance reflect the gravity of the debate.

Already, Republicans are threatening to gum up the Senate if Democrats change the procedures of the institution. But nonetheless, longtime defenders of the filibuster may have to make some tough choices, particularly as Biden’s economic agenda is stalled in Congress and Democrats reckon with sky-high promises they made after taking back the majority last year.

Sen. Chris Coons (D-Del.), who helped organize a bipartisan letter backing up the legislative filibuster in 2017, said he’s “seriously weighing” what to do.

“Part of the point of this week is for us to have a vigorous discussion as a caucus and a debate and understand what the proposal is. But I think passing the John Lewis Voting Rights Restoration Act and the Freedom to Vote Act is an urgent priority,” Coons said.

For a caucus that prides itself on unity, there’s plenty of nuance in Democrats’ views.

Some, like Sen. Jon Tester (D-Mont.) like a talking filibuster but are “not crazy” about making an exception for voting rights. Meanwhile, Sen. Jeanne Shaheen (D-N.H.) says reform is needed but is promoting more modest changes. She cites the near-impossible odds the party faces in getting all 50 Democrats on board for changing the filibuster unilaterally, also known as the “nuclear option.”

Manchin is hearing out several of his colleagues on changes, including Tester, while Sinema has urged a public debate. If Schumer does bring up rules changes on the floor, there’s a thought among his colleagues that everyone but Manchin and Sinema will quickly fall in line.

Democrats may never know until a vote occurs — and liberal groups are eager for Democrats to proceed. Still, there’s plenty of risk in moving forward, including the potential GOP attacks on battleground state Democrats like Kelly for taking tough votes on a doomed proposal.

Senate Republicans filed bills on Monday evening that were intended to put Democrats on the spot in the event that the majority party tries to change the chamber’s rules. Schumer responded that he would allow floor votes on those GOP-backed bills at a simple majority threshold if Minority Leader Mitch McConnell agreed to allow for passage of elections reform and voting rights legislation at a simple majority threshold. McConnell rejected that proposal.

Schumer has repeatedly made the public case that Democrats need to get on board. On Monday, he cast the stakes bluntly: Senators “can follow in the footsteps of our patriotic predecessors in this chamber or they can sit by as the fabric of our democracy unravels before their very eyes.” Nonetheless, Manchin seemed unmoved.

“This is a tough game. And I understand they have a tough job to do. I think Chuck has tried to be as fair as he could be this whole year. We did some great things, now they’re coming down to crunch time. And I understand the position they’re in and what they’re doing,” Manchin said on Monday. “But I’ve been very clear where I am. So hopefully they respect that too.”

Given Manchin and Sinema’s staunch opposition to getting rid of the filibuster, Democrats are weighing votes on reinstalling a talking filibuster or a filibuster exemption for voting legislation as alternatives to eliminating the 60-vote threshold entirely. But making those changes would require lockstep unity and going “nuclear” — a unilateral vote to change the rules on party lines.

Senate Majority Whip Dick Durbin (D-Ill.) said he was not sure where the votes were at the moment, but that “it’s important people be on the record.”

Asked what she could support, Shaheen said she wants to put the onus on the minority to put up 41 votes to stop legislation rather than on the majority to find 60 votes to advance legislation. She’d also like to eliminate the ability of the minority to block bills from even being debated on the Senate floor. Those reforms probably wouldn’t be enough to allow elections reform legislation to pass given unified GOP opposition, but would chip away at the minority’s power.

“We’ll see what gets put in front of us. I think we need to change the rules” to advance elections legislation, Shaheen said. “I think it’s problematic that we [don’t] have the votes to do that.”

Shaheen’s colleague, Sen. Maggie Hassan (D-N.H.), is among the recent converts to endorse a change to the Senate rules to allow the elections legislation to pass by a simple majority. Hassan is up for reelection this year, and she and several other Democrats like Raphael Warnock of Georgia, Michael Bennet of Colorado and Catherine Cortez Masto of Nevada are incumbents embracing changes to the Senate rules.

“I support the talking filibuster,” Cortez Masto said Monday. “I think it’s time … not only do we need to restore the Senate to the time where we debate issues that are important to the country. But that the country gets to hear that debate.”