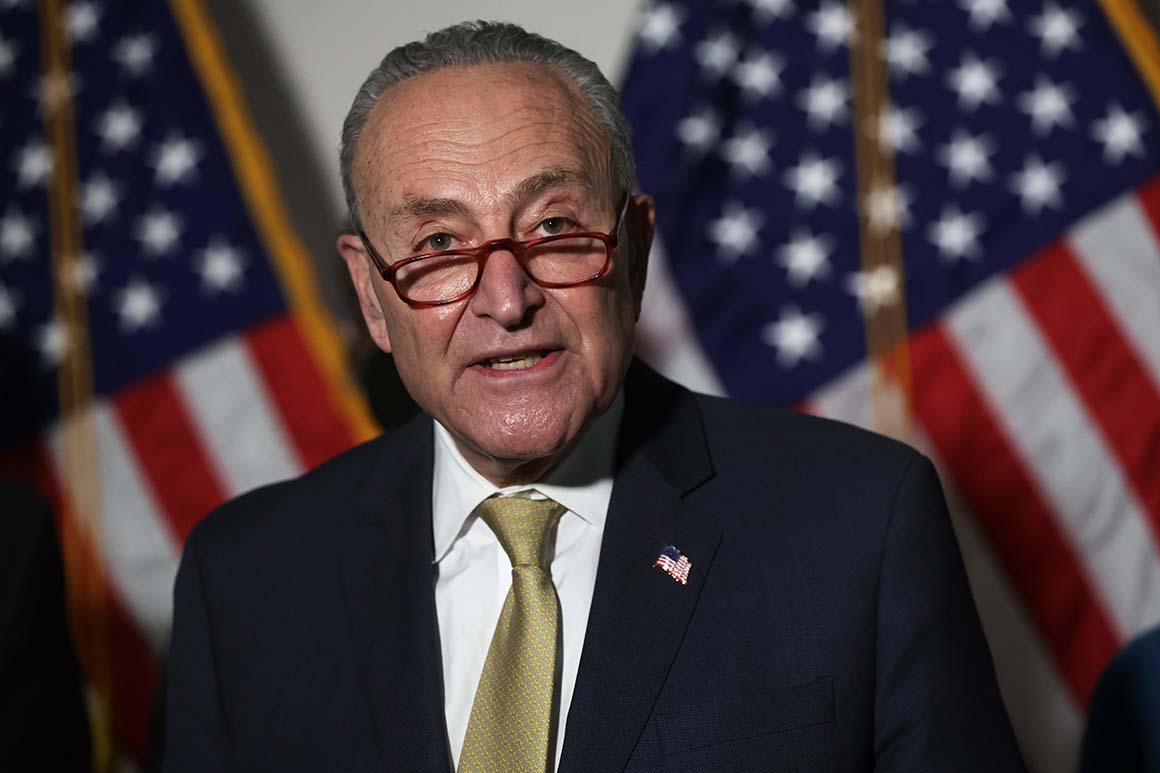 Senate Democrats are set to take a doomed vote Wednesday evening to weaken the filibuster to pass elections and voting reform, pressing forward despite unflinching opposition from Joe Manchin and Kyrsten Sinema.

Despite its looming failure, the vote will put senators on record regarding a reform to the talking filibuster that would allow — following lengthy debate — the elections and voting package to pass by a simple majority in a 50-50 Senate. And Majority Leader Chuck Schumer picked up one of the few remaining undecided senators on Wednesday as Sen. Mark Kelly (D-Ariz.) endorsed a rules change specific to elections legislation.

During his floor speech, Schumer acknowledged divisions in his caucus and had an implicit message for Manchin and Sinema, who have received a flood of angry critiques and mounting primary threats from progressives and Democratic donors.

Sinema has warned that watering down the 60-vote threshold will empower wild legislative swings when Republicans take back Congress and the White House, while Manchin says the higher threshold encourages compromise in an increasingly divisive environment. Their Democratic colleagues strongly disagree, positing that new voting regulations in GOP states should prompt the 50-member majority to change the fabric of the Senate.

Senate Democrats are seeking to pass legislation that would end partisan gerrymandering, increase disclosure requirements on “dark money” donations, expand early voting and designate Election Day a federal holiday. In addition, Democrats have included a bill named after the late Rep. John Lewis (D-Ga.) in the voting reform package, which would restore a provision in the Voting Rights Act previously gutted by the Supreme Court. The update Democrats aim to pass would require that jurisdictions with a history of discriminatory voting laws receive approval from the Department of Justice or D.C.’s federal district court for any changes to election laws.

After Republicans vote to block a final vote on that elections reform package, Schumer will move to change Senate rules, despite knowing failure is certain. It is rare for majority leaders to lose a push to change the rules along simple majority lines, known as invoking the nuclear option.

In 2013, then-Senate Majority Leader Harry Reid invoked the nuclear option to lower the threshold for executive branch and lower-court judicial nominees. In 2017, then-Senate Majority Leader Mitch McConnell used the nuclear option to take the rules change a step further, allowing Supreme Court nominees to be confirmed by simple majority. And McConnell used it again in 2019 to speed up the confirmation of lower-level nominees.

Some Democrats predicted the saga will play out far beyond Wednesday evening, when the showdown will occur on the Senate floor. Sen. Sheldon Whitehouse (D-R.I.) said the reasoning behind the failed vote “depends on whether you see this as the end of what we’re trying to accomplish or the beginning.” Those Democrats did not propose a plan to overcome Manchin and Sinema’s opposition.

“If you see this as the beginning, it’s self-evident that you have to let everybody know where the votes are,” he said.

Speaking to her caucus on Wednesday morning, Speaker Nancy Pelosi said Democrats’ push on voting reforms was still ongoing, despite centrist opposition to changing the filibuster.

She optimistically compared it to a scene in the movie “Princess Bride,” when Miracle Max helps bring a character back to life that he describes as “mostly dead” but also “slightly alive,” according to people familiar with her remarks.

“That contradicts everything we’ve said … that is not an option for us. If it were we would have done it,” Thune said.

McConnell resisted weakening the legislative filibuster under former President Donald Trump and has publicly praised Manchin and Sinema’s defense of the 60-vote threshold, highlighting their position during a Wednesday floor speech.

“It appears that a narrow, bipartisan group of senators will vote to save the Senate,” McConnell said. “With hope, with confidence, we will stand up and say that our institutions are worth protecting, that rules matter, that no American deserves to have his or voice in this chamber silenced. But a partisan minority will do the opposite.”

The path forward on elections and voting reform after Wednesday’s vote is unclear. A bipartisan group of senators, which includes Manchin and Sinema, recently formed to discuss potential updates to the Electoral Count Act and other election-related proposals. So far, Republicans have been receptive to only limited reforms.

Sarah Ferris contributed to this report.