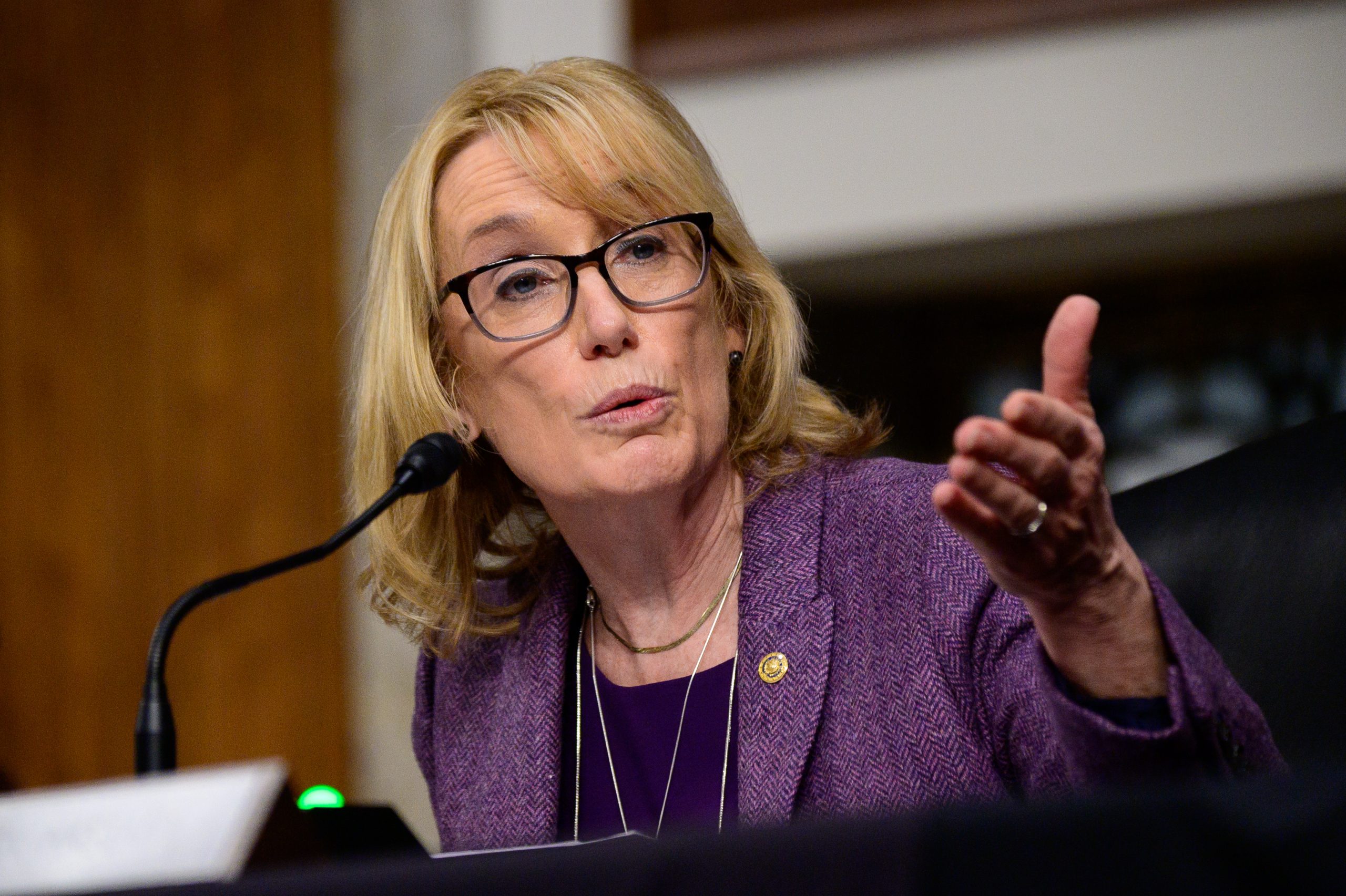 Jon Tester isn’t up for reelection this fall, nor is he threatening to oppose a party-line Democratic bill that might increase taxes. He still has a warning for his colleagues.

“I don’t think raising taxes is a winner anywhere, OK?” Tester said in an interview.

If Democrats can pass a bill that cuts the deficit and drug costs, the Montanan added, “there’s some positive things you can talk about. But the bottom line is that no, taxes are never a winner. We need to be very careful.”

As Senate Majority Leader Chuck Schumer and Sen. Joe Manchin (D-W.Va.) labor toward a possible summertime agreement on a filibuster-proof tax, energy and prescription drugs bill, the Democratic Party is reckoning with its long-term political position on taxes. For more than a decade, Democrats campaigned on raising rates on high earners and large corporations, arguing the GOP is the party of tax cuts for the top 1 percent.

Yet as Democrats near the climax of their monthslong push to unilaterally raise those taxes, there’s real division in the party over both how to talk about tax increases and whether to pursue them at all. Already some House moderates are balking at any tax increases in the bill, and Republicans are revving up a campaign that will hit Democrats for raising any taxes.

“I don’t think tax increases would be popular,” said Rep. Susie Lee (D-Nev.), one of the party’s most endangered House incumbents. But she added: “Let’s see what the Senate gives us.”

There’s relatively broad agreement on using any party-line bill to increase taxes on some high earning Americans who run so-called pass through businesses to pay for Medicare solvency. But Democrats are undecided on including a proposed surtax on people making more than $10 million and an increase in minimum taxes on large corporations. And Manchin says he won’t support any tax increases that aggravate inflation.

Democrats are aiming to raise $1 trillion to pay for their long-sought legislation; Medicare taxes and prescription drug reform get them roughly halfway there. They’re warmer to a 15 percent corporate minimum tax than on surtaxes on individual high earners, according to a person briefed on the discussions, but no final decision has been made. Each would raise roughly $200 billion.

The party is also considering other ways of raising revenue, including a new global tax deal and increased IRS enforcement, which is highly favored by moderates. And Democrats could reach their revenue targets even if they jettison some of the new tax increases.

Incumbent Sen. Maggie Hassan (D-N.H.) said she’s focused on lowering prescription drug costs and was noncommittal about which tax increases the bill might include: “If it were about closing loopholes for the wealthiest people and big corporations, I think that might be something the caucus will look at.”

In the House, some centrist Democrats are advising that voters have less of an appetite for the tax increases the chamber passed in the previous version of the party-line bill last year. One moderate leader, Rep. Josh Gottheimer (D-N.J.), has privately suggested the final deal should have no new taxes at all, though it’s unclear how far he or others would go to derail a major party priority.

Though tax increases on high-income Americans and big companies poll well, Republicans are eager to disregard that nuance and cast Democrats as broadly raising taxes amid inflation as well as a possible recession. The GOP plans to hammer any tax increases the Democrats include in their bill ahead of November’s midterms.

“This is the worst time for the Democrats to try to raise taxes. Period,” said Wyoming’s John Barrasso, the No. 3 Senate Republican, who called Democrats’ proposals “radical.”

In reality, what Democrats are discussing now falls far short of their hopes to reverse the 2017 Trump tax cuts or impose a wealth tax.

Sen. Gary Peters (D-Mich.), who chairs the Senate Democrats’ campaign arm, said the Medicare tax proposal is “something we should do” and that Democrats need to adhere to President Joe Biden’s pledge not to raise taxes on anyone earning more than $400,000.

Yet he too said he was unsure if tax increases on large corporations and millionaires might ultimately be included in the party-line package: “It’s worth considering. I don’t know if they’ll make it in this bill. We’ll see what happens. Clearly, people need to pay their fair share.”

Senate Democrats need all 50 of their caucus members to support any party-line proposal using the protections of so-called budget reconciliation, which lets a bill evade a filibuster but imposes strict rules on what the legislation can include. In the House, Speaker Nancy Pelosi can afford to lose only four votes on any Democratic-only bill.

And plenty of battleground House Democrats say they’re still ready to bet that soaking the rich remains popular back home if a bill comes before them.

“To say they’re popular would be a gross understatement,” said Rep. Tom Malinowski (D-N.J), offering a stark contrast to the tax hike worries of Gottheimer and Rep. Mikie Sherrill, his fellow Garden Staters. “I’ve never met a Trump supporter in my district who believes that Amazon should pay no taxes. The idea of making Amazon pay taxes while lowering the cost of prescription drugs takes it from like 97 to like 99 percent [approval].”

Others say that Manchin’s own methodical approach to shaping the bill — with his hyper-focus on inflation and targeted tax approach — helps them sell their own voters.

“Mr. Manchin has been very vocal about corporations paying their share, and I think that’s something that resonates significantly in my district,” said centrist Rep. Elissa Slotkin (D-Mich.).

Yet Manchin hasn’t agreed to anything firm so far. Asked about the proposal to raise taxes for Medicare solvency, he said that needs to be “scrubbed” along with everything else in the bill to make sure it doesn’t exacerbate inflation.

Underpinning the party’s hand-wringing over new taxes is how to talk about the bill, period. Democrats insist that they can outmaneuver any Republican attack ads — but they need a cogent argument of their own.

“It’s easy to just rail against taxes and not even stick to the truth,” said Michigan Rep. Dan Kildee, a swing-district Democrat who also sits on the House tax-writing panel. “If we are explaining what we’re talking about — people who are at the very top of the economy paying their fair share — that’s not a hard argument.”

Another unsolved strategic decision is what to even call the party-line bill. “Build Back Better” has been tossed overboard, but Democrats haven’t settled on an alternative. Instead, Democrats have taken to calling it “the reconciliation bill” internally, a reference to the complex budget procedure used to pass it.

Sen. Elizabeth Warren (D-Mass.) said calling the proposal “reconciliation” makes the bill sound like “some bad romance novel.” She’d be willing to call it the Joe Manchin Deficit Reduction Act, she quipped, “if that’s what it takes to get it done.” Rep. Scott Peters (D-Calif.) has an idea: the “Waiting on Joe” Act. And Peters had a message for his party as it squirms over how to deliver on a decade of tax promises.

“Our job is sometimes to create policy and build politics around it, rather than let ourselves be pushed by political winds,” Peters said. “Everyone’s scared of their own shadow, but we have to do the right thing.”