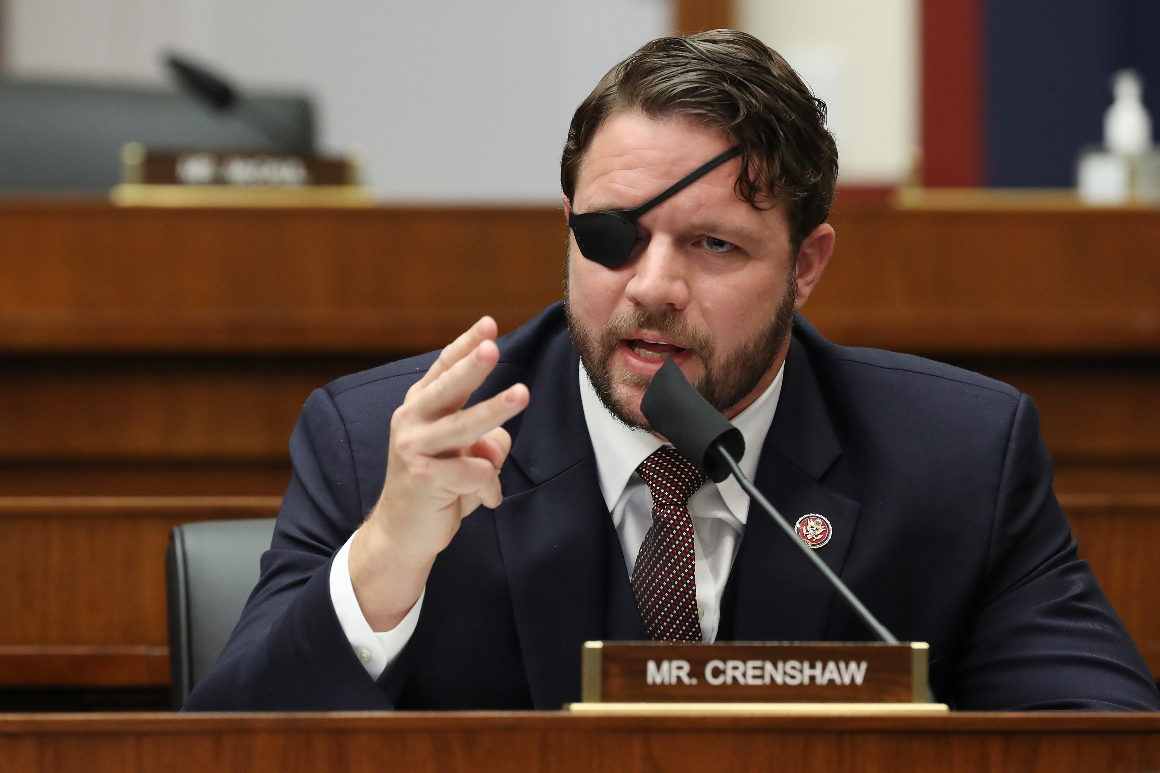 He voted with Donald Trump most of the time but isn’t a loyalist. He’s a stalwart conservative willing to criticize other conservatives.

Rep. Dan Crenshaw, in short, is a GOP anomaly.

In the roiling cauldron of Republican politics, where one perceived misstep can get a lawmaker scorched by the ex-president or the entire right-wing online ecosystem, Crenshaw’s candor stands out. He sparked ire on the right earlier this month for comments — caught on tape in his home state of Texas — that separated his fellow House Republicans into two camps: “Performance artists … ones you think are more conservative because they know how to say slogans real well,” and “legislators.”

The 37-year-old former Navy SEAL also challenged a perception about the party that most other Republicans don’t want to hear. In the same video, Crenshaw pointed out that Rep. Adam Kinzinger (R-Ill.), who was excommunicated from the party for condemning Donald Trump, voted with the former president during 2017 and 2018 more reliably than “everyone” in the ultra-conservative House Freedom Caucus.

Anyone who listens to Crenshaw and concludes he’s moving away from Trump, though, isn’t listening closely enough. As he sees it, his party needs to back up its rhetorical bombs with facts. When fellow Republicans can’t do that, he’d prefer they pipe down.

“I’m not looking for fights here. But if a false narrative is spreading quickly, you have to say something,” he told POLITICO in an interview. “I think politics has changed radically, where people want a freewheeling, authentic person. Fine, that’s good. And that’s certainly what I deliver. But you also need to be thoughtful and correct in what you say.” His recent skirmishes with other conservatives — commentator Dan Bongino called for Crenshaw to face a primary challenger, and Rep. Marjorie Taylor Greene (R-Ga.) tweeted that he was “shooting blanks” — aren’t the first time he’s defied orthodoxy on the right.

His comments about Kinzinger stemmed from an earlier clash over legislation regarding a vaccination database: Some Freedom Caucus members turned to friendly conservative media to claim that 80 fellow House Republicans compromised individuals’ privacy by voting yes, but Crenshaw and GOP leaders countered that the bill included new protections against federal government tracking.

“Unfortunately, many Republicans you trust are lying to you,” Crenshaw tweeted with an accompanied video explaining what the bill does.

And after the Jan. 6 Capitol riot, Crenshaw torched his colleagues’ arguments for challenging President Joe Biden’s electoral victory, calling claims of voter fraud part of a “mass manipulation” by members of his own party.

“They said they were protecting the Constitution. They knew full well they were shredding it,” he said on his podcast, recorded two days after the attack.

Crenshaw’s position struck some on the Hill as brazen, since he’d joined 125 other House Republicans in backing an unsuccessful lawsuit aimed at getting the Supreme Court to decide whether ballots in four states that Biden won had “significant and unconstitutional irregularities.”

But the second-term Texan, known for the eye patch he wears after a combat injury in Afghanistan, isn’t easily rattled. Asked about other Republicans swiping at him for his recent criticisms, he replied: “Who cares?”

He achieved national name recognition before arriving in Congress, answering conservative anger over a Saturday Night Live skit about his war wound by appearing on the show to get in on the joke. That early fame that helped launch his career “fell in my lap,” he admitted; he’s sustained it since with a powerful social-media following, an enviable fundraising apparatus, and generally strong capital in the party.

After getting a profile overnight that many politicians spend years striving to earn, Crenshaw has used his years in the House minority to expand his platform online and back home in his red district, which encompasses parts of Houston, as well as on the Hill. Around the Capitol, he’s viewed as more introverted and serious about policy than his outward image suggests.

“He’s more of a philosopher than most members of Congress are. And he takes the time to understand the issues and the rationale behind some of these positions,” said Rep. Mike Garcia (R-Calif.), one of Crenshaw’s friends in the House. “He … doesn’t necessarily blindly follow the party platform just because that’s what the Republican Party wants to do.”

Those skills undoubtedly help when he clashes with factions of his party, as he has this month. Crenshaw said the viral video of his comments about “grifters” in the GOP lacked context, that he wasn’t going after the entire Freedom Caucus as much as making a broader point about forces on the right — including media personalities and influencers — who peddle misinformation and leech off of the GOP base’s fury.

His “grifters” comment referred to only “a couple of” sitting House Republicans, Crenshaw said, but most “got dragged into it” because of their voting records. (Kinzinger’s votes had a 99 percent Trump alignment during the 115th Congress, according to FiveThirtyEight, better than all but five other GOP lawmakers.)

“The people who really reacted harshly probably are the people I’m talking about, because I struck a nerve with them,” he said. Some conservatives who responded more mildly are still displeased.

Freedom Caucus member Rep. Chip Roy (R-Texas) offered a thinly veiled dig when asked about Crenshaw’s viral video, saying a group of House Republicans have chipped away at vaccine mandates “without any help from a whole lot of people who throw in a lot of criticism about our tactics.” Crenshaw says he isn’t sure there’s much philosophical difference between himself and Freedom Caucus members, but he rolls his eyes at frequent motions to adjourn and other caucus tactics he said he finds “very ineffective.”

The Texan’s military background has a deep influence on his current life, from his views on policy to the colleagues he’s befriended. Crenshaw has gravitated toward other veterans in the House GOP who have their own inside-joke teasing patter that he says is reminiscent of their time in the service.

Beyond that inner circle, the Harvard Kennedy School graduate has chafed some other colleagues for coming off as cocky or a know-it-all. His allies dismiss suggestions that his confidence is arrogant, arguing that Crenshaw puts in extra work to understand an issue inside and out.

And while Crenshaw has no leadership position, members say he doesn’t need one to have influence.

“I think he is one of the most important members of the Republican conference. And I think that he has the potential to be an incredible leader going forward,” said Rep. William Timmons (R-S.C.), who entered Congress the same year as Crenshaw.

Crenshaw tries to play Congress’ inside game by not making it personal when he takes jabs at other Republicans — even if it is clear at times who he’s aiming at. That isn’t a hard and fast rule, though: He described Greene as “not a serious person.”

His outspokenness has also prompted questions among his colleagues about where he wants to go next. Crenshaw says he isn’t angling for any senior spot in the GOP, but nor has he ruled anything out.

“If a politician maps out a career that way, they tend to fail. They tend to fail to meet their goals because you will make missteps, you will be inauthentic” by following a predetermined path, Crenshaw said. “What I try to do is set myself up for success for whatever opportunity might arise.”