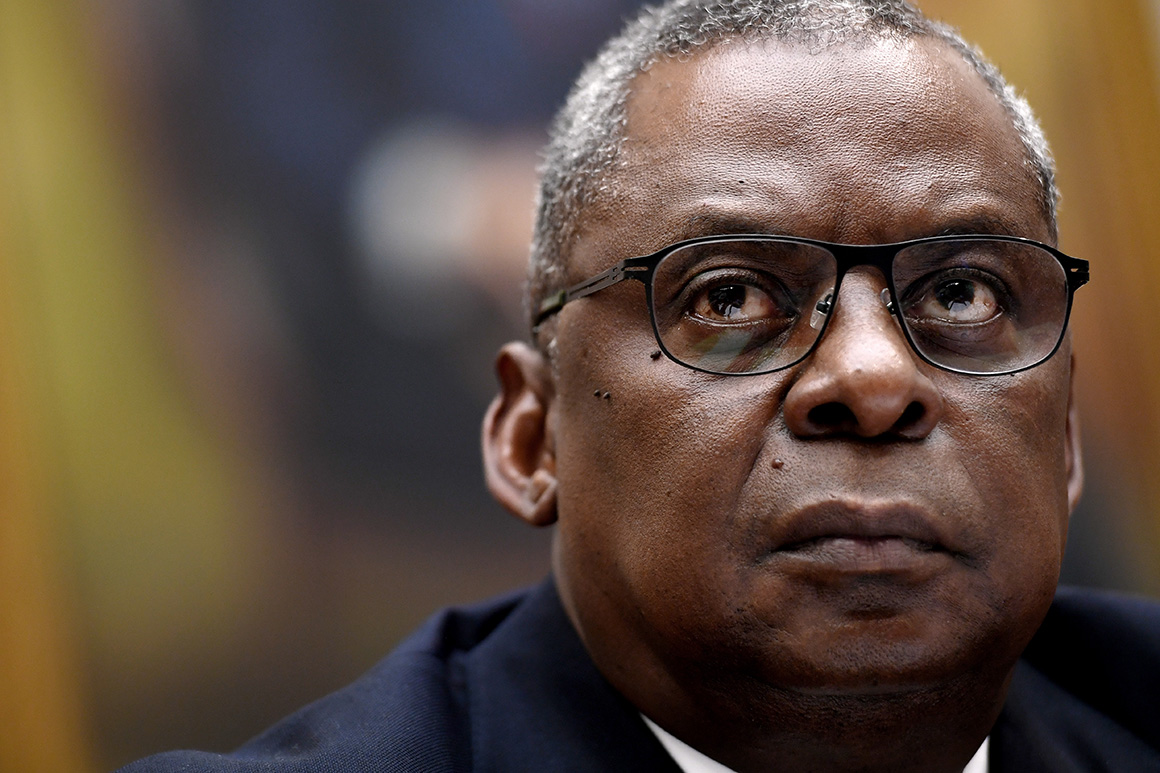 One year after a few dozen military veterans took part in the Jan. 6 insurrection at the U.S. Capitol, the Pentagon has responded by tightening regulations to combat extremism in the ranks.

But the war has only just begun, according to Defense Department officials, lawmakers and experts on extremist movements.

Military leaders say they are still struggling to determine how many troops are engaging in extremist behavior and refine what activities should be barred. They have yet to develop recommended training for commanders and senior enlisted leaders to spot white supremacists, as well as anti-government or other radical elements hiding in their units. And proposed reforms to the military justice system to make extremism a crime are the focus of a new review mandated by Congress.

But perhaps most of all, the Pentagon needs to avoid the mistake it has made too many times before: losing focus on an enduring threat once the public and high-level attention fades. But there are serious doubts leaders have the staying power to make the new efforts stick.

“The past 40 years has basically been a history of some sort of crisis that illustrates extremism in the military and then there’s some sort of patchwork measures taken to try to deal with it,” said Mark Pitcavage, a leading authority on extremism at the Anti-Defamation League.

“And then it kind of subsides until the next crisis.”

Heidi Urben, a retired Army colonel and specialist on the military and politics at Georgetown University, agreed that the key is “to what extent the services will be able to sustain focus and command emphasis at all levels from this point out.”

She noted that the military branches, “particularly the Army, placed a lot of emphasis on countering extremism in the 1990s, and then that attention dissipated.”

At least 80 of the 700 individuals charged in the Jan. 6 attack on the Capitol have a record of military service. And one study put it as high as 118 — or more than 15 percent.

Their leading role served as a wake-up call for military leaders. Defense Secretary Lloyd Austin ordered a forcewide stand down to remind the troops of prohibited behavior. He also established a working group to review the issue and recommend changes.

In December, Austin issued a memorandum ordering “increased clarity” on what constitutes extremist behavior that could get troops kicked out of the military and how commanders should handle it.

He also approved revised guidelines that add new activities to the list of prohibited actions, including “liking” an extremist post on social media.

“The available data generally shows that cases of prohibited extremist activity among service members was rare,” the Pentagon working group concluded in reaching its consensus last month. “However, even a small number of cases can pose a significant problem, challenging safety and unit cohesion.”

‘To spot that sort of stuff’

The Defense Department is the first to acknowledge it has a lot more work to do.

Top of the list is developing more effective means to track how many troops are being punished or removed on a regular basis for engaging in extremist activities, either through the military justice system or criminal or administrative investigations by the military branches’ internal watchdogs.

The working group pegged the number at roughly 100 in 2021, but also asserted it’s probably not a complete picture of a phenomenon that operates mostly in the shadows.

“While our ability to track those cases has improved since 2018 with the introduction of systems for flagging or coding cases that has that element,” a DoD official recently told reporters, “those systems have come online at different points over the last several years. So it makes it a bit challenging to compare data … one year to another.”

Cassie Miller, a researcher on extremism at the Southern Poverty Law Center, said the recent burst of extremist activity and movements nationally means the military desperately needs a better understanding of how much it has become a breeding ground, especially for those who leave the service.

“There hasn’t been a priority [historically] on gathering that kind of data,” Miller said. “And so in a lot of cases, it simply does not exist.”

Pentagon spokesperson John Kirby told POLITICO that the recent decisions are seen as an initial salvo in a longer-term strategy to tackle the threat.

The Defense Department’s extremist working group has outlined a series of additional efforts to try to get a better picture.

For example, it enlisted the Institute for Defense Analyses, a government think tank, to complete a more detailed study of the extent of the extremism problem by June 2022. The study will include a review of “information-collection systems and data” and “behavioral pathways to extremist activity” such as how extremist groups recruit followers or encourage members to join the military to receive training.

A separate study by the Pentagon’s Applied Research Laboratory for Intelligence and Security will also evaluate new procedures for background investigations in order to flag potential extremists trying to join the military or entering the ranks of defense contractors with access to weapons and other sensitive equipment.

“Not everybody needs to be trained on that,” Pitcavage said. “But people in a number of positions, from recruiters to initial entry trainers and advanced trainers, company grade officers and senior enlisted personnel, there are key people that are in positions to spot that sort of stuff.”

Who is an extremist?

But Pitcavage also believes the Pentagon’s updated catalog of what is considered out of bounds “very, very narrowly” defines extremist behavior.

“They all have to be based on one or more of the extremist activities that are listed,” he said. “And all of those have to do with basically violence, criminal activities or breaking regulations.”

But that raises the question of whether a service member could be a member of a white supremacist group “as long as it doesn’t specifically advocate the overthrow of the government or violence against people of other races or religions,” Pitcavage added.

The problem with that, in his view, is “most white supremacist groups don’t advocate the overthrow of the government.”

Even one white supremacist in a military unit “can create all sorts of problems completely unrelated to overthrowing the government,” he warned. “They can pass on information to other extremists, including those who might belong to explicitly violent groups.”

“They’re going to have to expand the range of extremist activities that are covered,” he said.

Kirby disagreed with the claim that the new regulations are too broad. He said the rules include a “very detailed list of what we consider to be active participation in extremist activity,” including fundraising, attending rallies, or espousing racist or other violent ideologies such as “advocating widespread unlawful discrimination.”

Pitcavage would also like to see more focus on preventing troops from supporting extremist individuals, not just groups.

“Most white supremacists are not actual members of white supremacist groups,” he said. “In the days of the internet the need to join a formal group is simply far less than it used to be decades ago.”

“They are going to have to close the loopholes like that,” he added.

Kirby countered that the new rules barring “active participation” will make it “very difficult for you to provide support to individuals as well,” Kirby added. “We’re proud of the specificity.”

But they also complain that the brass has resisted taking more aggressive steps to build a more sustained effort to keep extremist influences at bay over the long term.

Rep. Anthony Brown (D-Md.), an Army lawyer and member of the Armed Services Committee, led the effort after Jan. 6 to adopt legislation that would establish a dedicated office within the Pentagon for combating extremism.

But his bipartisan proposal, which passed the House, was stripped from the final defense policy bill after Pentagon opposition. He called that “a real missed opportunity to take a giant step forward.”

The measure would also have put Congress on the record that membership in an extremist group should be disqualifying for military service.

“We got a lot of pushback from the Pentagon on that issue,” Brown said in an interview, recounting military concerns about infringing on free speech. “They were fearful of constitutional challenges.”

Kirby maintained that there was an active debate about barring membership in such groups outright. “It was an active part of our deliberations,” he said. “There were genuine First Amendment rights we felt needed to be considered.”

But Brown dismissed that argument. “I am well aware of the deference that courts give to both the president and Congress when it comes to restricting constitutional freedoms in order to maintain good order and discipline in the military,” he said.

“I thought that was a missed opportunity to make that clear statement,” he added.

Brown also said the Pentagon opposed other mandates. For instance, “they thought the training requirements and data collection were overly burdensome, which is a joke,” he said.

There will have to be more

“This was a first step and I think there will have to be more,” Crow said of the recent Pentagon reforms. “This is going to rely a lot on command commitment and commitment of the senior leadership pushing this down to the lower ranks in the military.

“I wanted to see this formalized, have some formal structures put into place that would help push that sustained long term change and cultural shift that we need and to make this a priority,” he added in an interview.

Potentially still ripe for revision is the Uniform Code of Military Justice to make extremist behavior a crime.

The National Defense Authorization Act included a provision requiring Austin to submit a report “containing such recommendations as the Secretary considers appropriate with respect to the establishment of a separate punitive article in the UCMJ on violent extremism.”

“It’s hard to deter extremism or hold folks accountable on a consistent basis without having clear terminology, definitions, standards,” she added. “All of these efforts require sustained command-level emphasis over a long period of time to be effective.”

And that means not letting up when the issue is out of the headlines. “Measures have to be put in place to continually detect and deal with it on an ongoing basis,” Pitcavage said. “The military does seem to be moving in that direction, but the steps taken so far are just the first steps in what is going to be a considerable journey.”