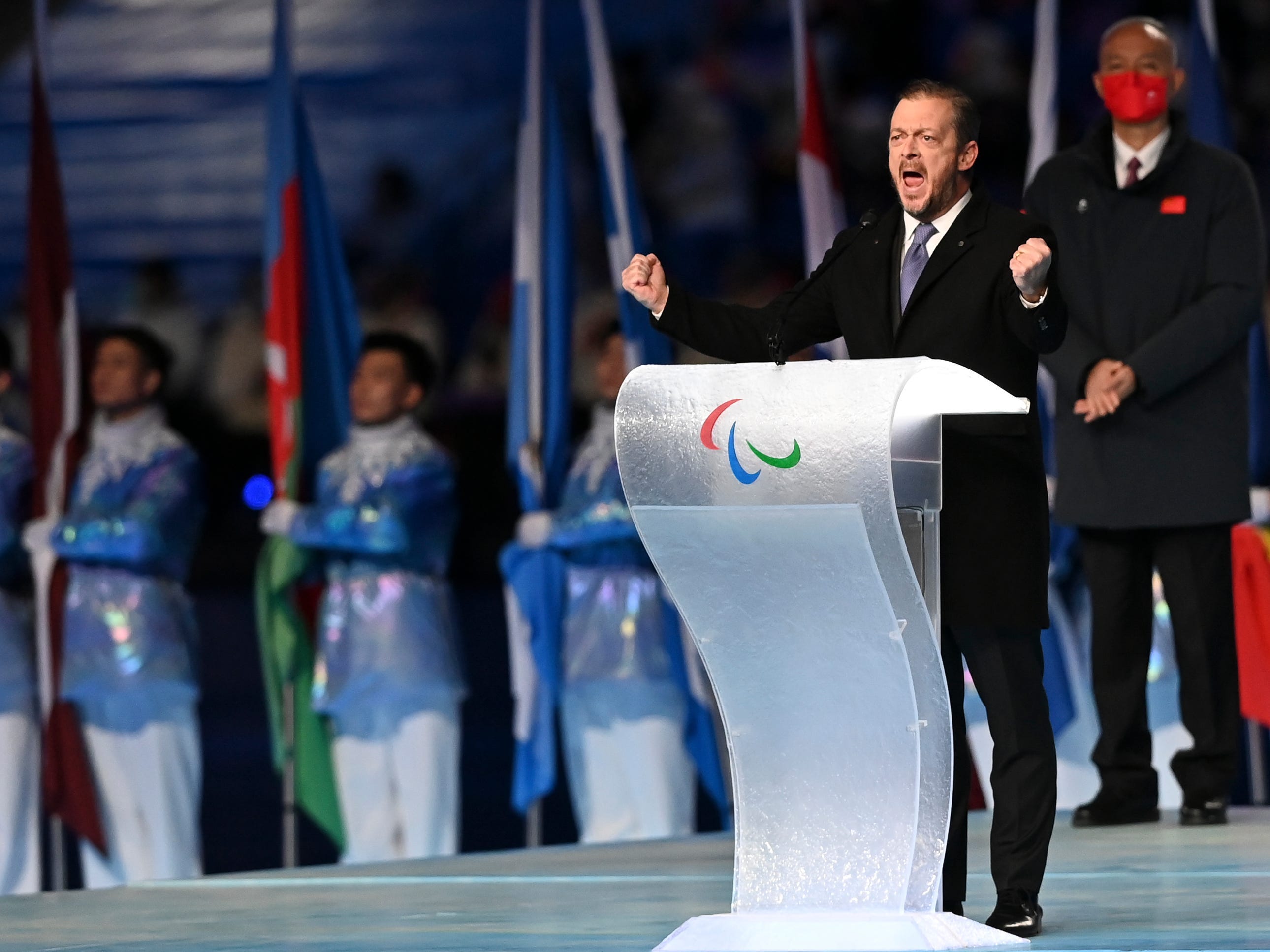 Andrew Parsons, president of the International Paralympic Committee, made a forceful anti-war speech at the opening of the Winter Paralympic Games in Beijing on Friday.

“I am horrified at what is taking place in the world right now. The 21st century is a time for dialogue and diplomacy, not war and hate,” Parsons said as he opened his English-language speech in front of Chinese President Xi Jinping and other dignitaries at Beijing’s National Stadium.

While Parsons, a Brazilian, was delivering those words, the live interpreter for China’s state broadcaster CCTV only said in Mandarin: “Parsons says that the IPC hopes for a better and more inclusive world where there is no discrimination, nor hate, nor ignorance.”

As Parsons continued the speech, his voice softened. He went on to say that the United Nations-approved Olympic Truce — which stresses that peace must be observed during the Olympics and Paralympic Games — must be upheld.

However, the Mandarin-voiced translation altered his words to say Parsons hoped that all athletes could compete in a friendly manner and showcase the best of humanity through sports.

Parsons’ speech was notable for breaking away from the committee’s avoidance of discussing politics at the Games, even as the organization has been more vocal about its position on the invasion. Last week, the IPC banned Russian and Belarusian athletes from attending the Games.

“Ensuring the safety and security of athletes is of paramount importance to us, and the situation in the athlete villages is escalating and has now become untenable,” Parsons said during a press conference last week.

The IPC has asked CCTV to explain its actions and is still waiting for a response, Agence France-Presse reported on Saturday.

The opening of the Winter Paralympic Games comes at a sensitive time for Beijing. China has noticeably avoided openly condemning Putin’s actions even as the West tightened sanctions on Russia.

Separately, China’s official broadcaster of the English Premier League, iQiyi Sports, declined to screen live matches over the weekend, the Guardian reported, after the Premier League said that it would show support for Ukraine during the matches.

China has tried to strike an air of neutrality. It abstained from a United Nations vote to condemn Russia’s actions on Thursday. Last week, China’s foreign minister Wang Yi told his Ukrainian counterpart Dmytro Kuleba that China hopes Ukraine and Russia can find a diplomatic solution to the conflict.

However, Sense Hofstede, a PhD candidate researching China, Taiwan, and Singapore at the National University of Singapore, told Insider that China’s actions shouldn’t be mistaken for anything but pro-Russia.

Media in China often react in a manner that will echo the Chinese government’s views while not offending public sensibilities, Hofstede explained.

“What we see is the consequence of a combination of demand and supply: the party-state is clearly actively supplying a a Russian-friendly information environment, but this also fulfills the demand for pro-Russian narratives among a largely anti-American public,” said Hofstede.