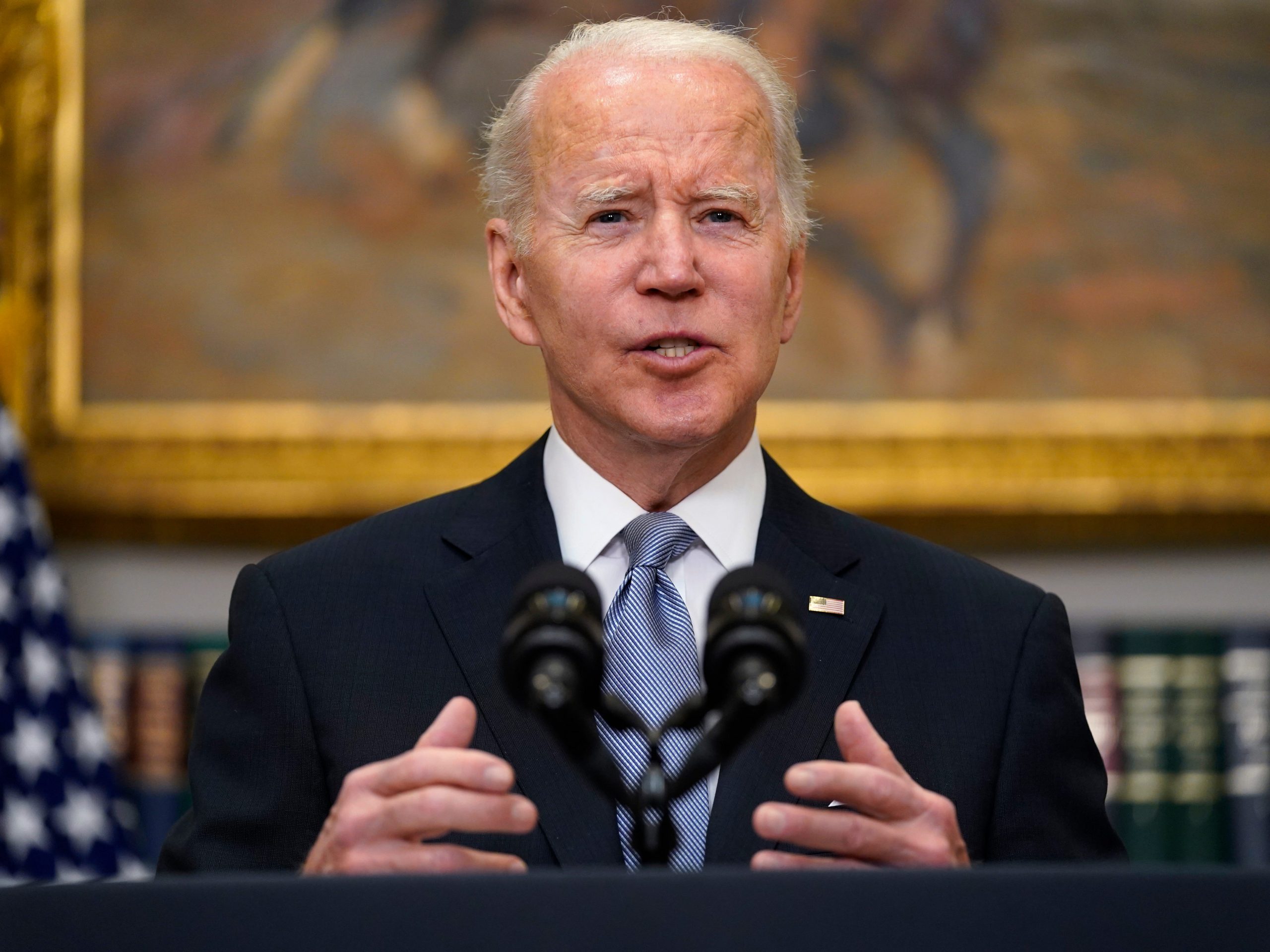 President Joe Biden delivers remarks on the Russian invasion of Ukraine in the Roosevelt Room of the White House on April 21, 2022.

President Joe Biden was poised to nominate an anti-abortion attorney to a federal judgeship on the same day that Roe v. Wade was overturned by the Supreme Court, according to the Louisville Courier-Journal.

In a White House email sent to Kentucky Democratic Gov. Andy Beshear on June 23, the administration announced that Biden planned to nominate Chad Meredith for a lifetime appointment to the US District Court for the Eastern District of Kentucky on June 24, per the newspaper.

On June 24, the Supreme Court struck down Roe v. Wade, the 1973 court decision that legalized abortion in the United States and established a constitutional right to the procedure. (The Bluegrass State already had a trigger law in place ending abortion procedures in the state if Roe was tossed aside, but a federal judge has temporarily blocked it from taking effect, according to the Lexington Herald-Leader.)

Meredith’s nomination to the federal court has not been announced by the White House, but there are no signals that the administration has reversed course.

The undated email, which came from Kate Marshall — the White House senior advisor to governors and a former Nevada state treasurer and lieutenant governor — was recently accessed by the Courier-Journal.

The document read: “To be nominated tomorrow: … Stephen Chad Meredith: candidate for the United States District Court for the Eastern District of Kentucky.”

Beshear on Thursday was highly critical of the potential elevation of Meredith, a former chief deputy general counsel under ex-Republican Gov. Matt Bevin who later served as Kentucky’s solicitor general. During the last few months of Bevin’s administration, the governor made a series of controversial pardons, including one of a man who had been convicted of raping a child.

“If the president makes that nomination, it is indefensible,” the governor said during a Thursday press conference. “This is an individual who aided and advised on the most egregious abuse of power by a governor in my lifetime.” The nomination has also attracted the ire of other state Democrats — including influential Rep. John Yarmuth of Louisville and Senate candidate Charles Booker — who are still reeling from the Roe ruling.

Yarmuth, the chairman of the House Budget Committee, told The Courier-Journal that the prospective nomination was a “huge mistake” and remarked it was “some kind of effort to appease Mitch McConnell, which is something this state and country should be very upset about.”

“Why you would pick him to fill a federal vacancy when you’re a Democratic president is beyond me,” he added.

Booker, the party’s nominee to face Republican Sen. Rand Paul this fall, also blasted the prospect of Meredith on the bench.

“The president is making a deal with the devil, and once again, the people of Kentucky are crushed in the process,” he tweeted. “At a time when we are fighting to protect human rights, this is a complete slap in the face.”

“This is some bullshit,” he added.

McConnell, the longtime Senate Republican leader, could potentially lead the upper chamber once again if the GOP regains control this November. And in such a scenario, Biden would need to work with McConnell in order to move judicial nominations through the chamber as Republicans would effectively hold veto power over the Democratic administration’s appointments.

Biden on Thursday called on the Democratic-led Senate to create a filibuster carve-out to codify Roe into law.

In the 50-50 Senate, Democrats would normally need 60 seats to overcome a filibuster; while the president wants the party to unite to alter the upper chamber’s rules to pass a bill, Democratic Sens. Kyrsten Sinema of Arizona and Joe Manchin of West Virginia do not support such a change.

Spokespeople for the White House have so far not confirmed the Meredith nomination, saying “we do not comment on vacancies.”