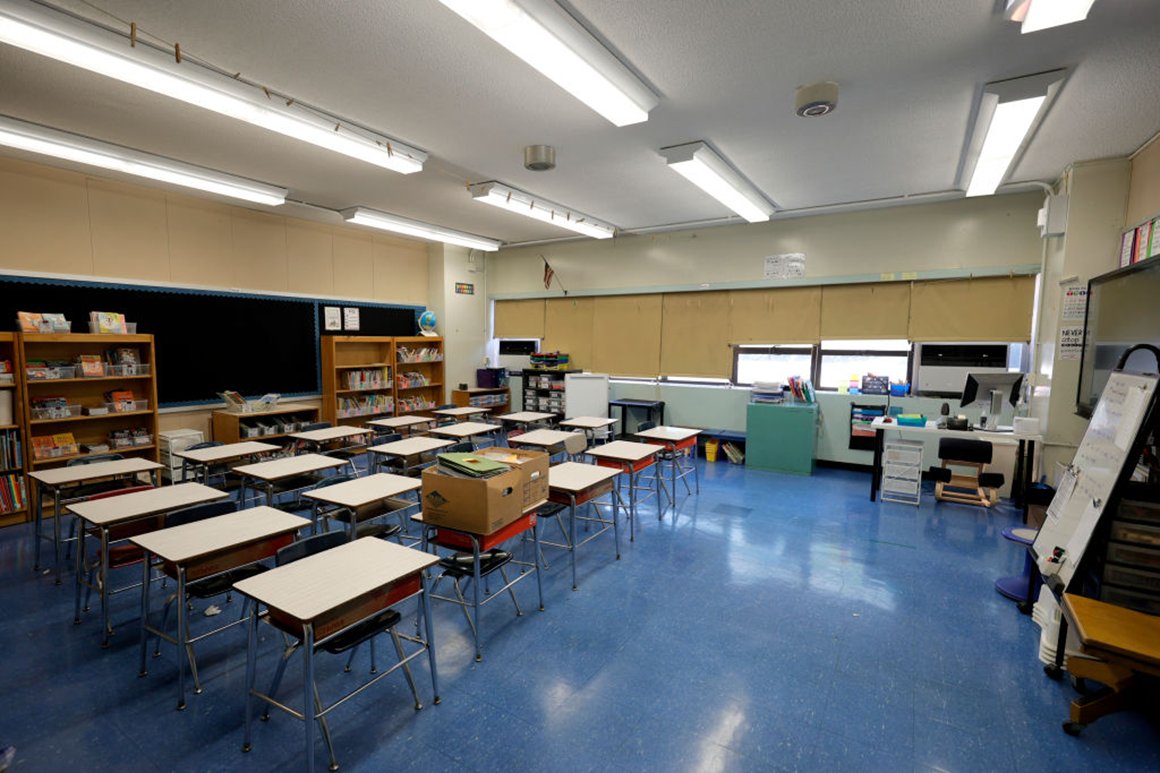 President Joe Biden’s plea to keep schools open in the face of the fast-spreading Omicron variant is confronting major challenges this week as staff shortages, illnesses and labor unrest grip some of the nation’s biggest school systems just as students are supposed to return from winter break.

Schools in Atlanta, Milwaukee and Detroit closed classrooms this week. The Chicago Teachers Union is considering a unilateral move to remote learning in defiance of Mayor Lori Lightfoot and city school officials. And some California districts face woeful staff shortages that are forcing them into any number of contingency plans — except for Zoom.

But governors, mayors and the Biden administration are resolute that schools should remain open. Education Secretary Miguel Cardona hammered that message during a weekend talk show media blitz, even as he acknowledged short term emergency closures might be necessary in the coming days.

“There’s a level of urgency that we shouldn’t lose — around making sure that our children learn in person,” Cardona said during an appearance on Fox News Sunday.

That stated goal is starting to face practical impossibilities, however. Like the airline and health care sectors last month, schools are now grappling with Covid-19 cases among the staff needed to keep classrooms open, as well as how to maintain student safety when classmates test positive. Despite expanded availability of vaccines for children and White House promises to purchase and distribute 500 million virus tests to households beginning this month, it’s apparent that many schools still can’t keep up with infections and scan their communities for the disease.

“We have to acknowledge the challenge, and if there are logistical issues such as an infection rate being too great and staff shortages making it impossible to have a school open, then the school has to be on a temporary pause,” American Federation of Teachers President Randi Weingarten said in an interview.

“Where I’m frustrated is we don’t have a federal system. We have a system of 16,000 school districts in 50 states and multiple territories, and some places have been able to put in testing and masking, and other places have not,” she said. “The president has said that he’s going to have 500 million tests available in January. If school is as important as I assume it is, they should be first on the line to get them.”

For now, political leaders across the ideological spectrum are pressuring schools to keep their doors open, pointing to the social and academic damage suffered by students who stayed home earlier in the pandemic. They’re responding to parents exasperated by the growing potential for winter disruptions and fears of prolonged distance learning.

“Once again, parents are left scrambling at the last minute and, worse, far too many children are being deprived of an in-person learning experience, which is critical for their academic and social-emotional development,” said Keri Rodrigues, president of the National Parents Union advocacy group, in a statement on Monday. “This could have and should have been avoided.”

Cardona raised concerns about parental hardships in his Fox interview. “Many parents don’t have the luxury of staying home,” he said. “So we have to do everything possible to keep [students] in school as our Plan A, Plan B, Plan C.”

New Jersey Gov. Phil Murphy acknowledged surging case counts in schools and challenges with staffing, and announced the state will extend its school mask mandate that was set to expire next week. But the Democrat told reporters “we currently have no intention or plan to shut our schools down.”

Florida Republican Gov. Ron DeSantis also declared his state’s schools won’t shutter for in-person learning when droves of students and teachers return as soon as this week, while suggesting it was “absolutely insane” to see universities across the U.S. switching to online courses. Charlie Baker, the Republican governor of Massachusetts, also advocated for in-person learning as much as possible in the new year.

California’s Democratic Gov. Gavin Newsom seems to have stepped ahead of the curve when he got every education, labor and management group together to pledge last month that they’d do everything in their power to keep schools open. So far, the state’s powerful teachers unions have not made any noise about wanting to shut down again.

In some cases, remote classes aren’t an option.

Record infection rates in Detroit mean the city school system cannot hold in person or online classes at least through Wednesday, Superintendent Nikolai Vitti told families in a New Year’s Eve message. An immediate return to classes this week would have led to “extensive Covid spread,” the superintendent said, which would put the school system’s employees, students and families at risk and threaten “excessive staff shortages.”

“We simply cannot go online districtwide Monday,” Vitti added. “Because all of our students do not have laptops.”

The city’s teacher union is set to weigh a high-profile protest of safety conditions in the country’s third-largest school system this week.

Chicago Teachers Union delegates plan to meet virtually on Tuesday and vote on a measure to teach remotely, instead of in schools, for up to two weeks beginning Wednesday. Rank-and-file union members would also vote on the measure via an electronic ballot, a labor group official told POLITICO.

Such a job action, if approved, would pause this week’s return to physical classrooms and mark the latest clash between the union and Lightfoot’s administration — which could decide to lock teachers out of remote classes if they refuse to work in person.

“You’ll have to ask them if they would prefer that children, who they know won’t be in these buildings, should be without any type of interaction or any type of education,” union Vice President Stacy Davis Gates said of the city during a Monday morning press conference.

“I am so pissed off that we have to continuously fight for the basic necessities, the basic mitigations,” Davis Gates said.

The union unsuccessfully urged city officials to consider a two-week pause to in-person learning — or require negative virus tests to access classrooms — after families overwhelmed mailboxes with tens of thousands of screening tests last week, to the point where they spilled onto sidewalks.

Many of those test samples now appear to be useless. According to district staff and student testing data, nearly 25,000 of approximately 36,000 virus tests completed between Dec. 26 and Jan. 1 were deemed “invalid.”

District CEO Pedro Martinez nevertheless told families on Sunday that he stood “firmly” behind the decision to keep schools open for in-person learning, and the school system continues to plan to temporarily place individual classrooms or schools into remote learning if necessary. On Monday, the district said it was “deeply concerned” the union’s plans could place the community’s safety “at increased risk.”

“Fundamentally, we know our schools are safe, our schools are not the source of significant spread, the issue is community spread,” Lightfoot said Monday during an appearance on CNBC where she criticized “saber-rattling by teachers union leadership.”

Facing a potential crisis on his third day on the job, New York City Mayor Eric Adams rolled out a media campaign asserting that city schools are safe for students and teachers alike.

“I’m going to keep my schools open and we’re going to have the staffing to ensure that our children are in a safe place. That’s the best place for our children,” Adams said in an interview on WPIX on Monday morning.

His remarks come as teachers and parents have voiced concerns about the administration’s handling of the virus in schools.

So far only one school, P.S. 58 in Brooklyn, announced that it would be closed on Monday as a result of a staffing shortage. The school reportedly did not get approval from the Department of Education, which is looking into the matter. The agency did not have absentee rates for teachers and students immediately available Monday.

“We’ve seen throughout the metropolitan area for the last week that there’s been high absenteeism in all industries and I want to reiterate that if people are sick, we do not want them coming to school,” United Federation of Teachers President Michael Mulgrew said Monday during a press conference in Manhattan. “[If] they’re showing symptoms, we do not want them in school.”

Some teachers have been calling for a remote option until there is sufficient testing available, and the UFT wants to delay in-person learning and keep classrooms remote for at least a few days this week.

California kept schools closed longer than any other state in the first phase of the pandemic, but now the political winds are clear: students will keep coming to class regardless of Omicron.

Newsom signed a law over the summer to make it extremely difficult for districts to have schools go remote. It decrees that distance learning must come in the form of independent study — an approach that classroom-based schools cannot provide.

As California schools resume this week and next, districts are left to weigh a number of Option B’s as they grapple with a reduced staff.

Jason Peplinski, superintendent of Simi Valley Unified just north of Los Angeles, said ahead of Wednesday’s return to school he has 51 staff members out with Covid or Covid-positive tests. A neighboring district, which resumed on Monday, has 75 people out. Since clustered districts share the pool of nearby substitute teachers, they are projecting steep competition to get temporary replacements into the classrooms.

“I was actually talking with some colleagues this morning and we’re all facing the same concerns: anywhere from 10 to 15 to 30 percent of our staff being out right now with Covid, self-identified, or tested,” Peplinski said.

For now, plans include merging classes together in larger meeting places, like school libraries or gymnasiums.

“It’s going to be a real challenging time to be sure,” Peplinski said.

Andrew Atterbury and Carly Sitrin contributed to this report.