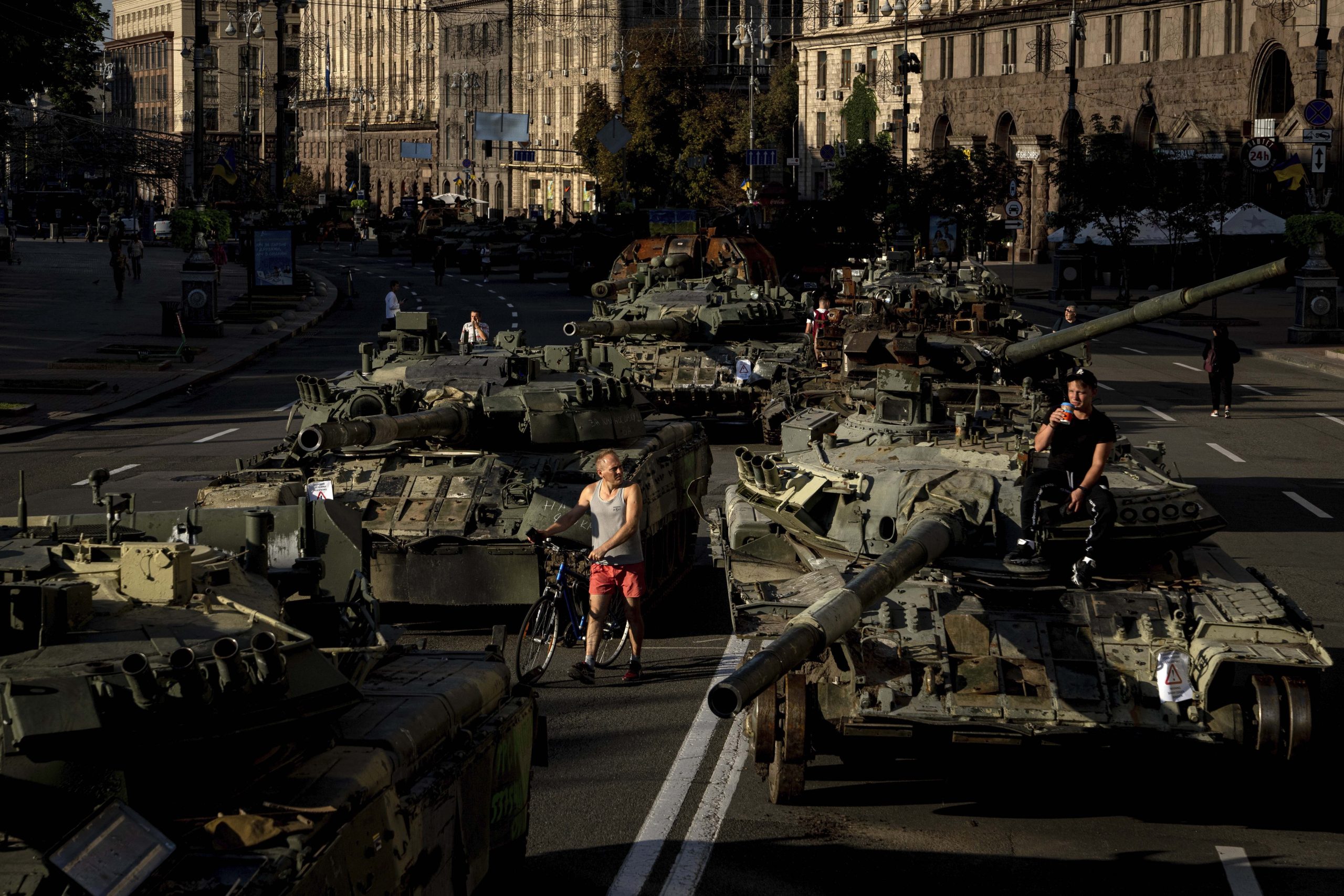 America’s involvement with the war in Ukraine hit a new phase on Wednesday, when the Biden administration kicked off an effort to funnel billions of dollars directly into the U.S. defense industry to support Kyiv’s long-term fight against Russia.

The White House is also preparing to send Congress a new plan to restock the warehouses of NATO Baltic allies who have sent their own equipment to help in the fight.

As the war in the Donbas and in Ukraine’s south has settled into a punishing artillery duel with only incremental gains by both sides, Kyiv and Moscow are beginning to brace for the coming winter and what promises to be a long, grinding war.

Ukraine’s needs remain urgent, and the immediate military assistance packages will no doubt continue to flow in the coming weeks and months. But as Kyiv looks to continue its struggle against now-entrenched Russian forces across hundreds of miles of front lines, allies are looking at the long game.

The Biden administration announced a new $3 billion package on Wednesday that will directly fund contracts with the U.S. defense industry for artillery rounds, mortar rounds, surface-to-air missile systems; a new counter-drone capability; additional drones; and 24 counter-battery radars. The move marks a major shift in how the U.S. has supplied Ukraine, from pulling existing weapons off of shelves to awarding contracts to defense firms for weapons that need to be built.

None of that equipment will arrive for months, if not years. But officials say the investment will allow Kyiv to begin planning for its own future defense. The hope is that other wealthy European nations, which have at times lagged in their support for Ukraine, might follow suit in the coming months.

“What needs to happen now is to build that longer-term pipeline,” one Western diplomat told POLITICO on the condition of anonymity to discuss the war. “At some point, particularly for the U.S., U.K., and some of the near neighbors like Estonia and Poland who have been generous with the equipment they have, [donating existing stocks] isn’t going to be sustainable forever.”

Some analysts expressed surprise that Wednesday’s package includes things like artillery and mortar rounds, which the U.S. has been supplying by the tens of thousands out of its own stockpiles.

“This might signal that some of these items are getting short in the DoD inventories and that DoD cannot supply them out of existing stocks,” said Mark Cancian, a senior adviser with the Center for Strategic and International Studies’ international security program. Production delays and cold manufacturing lines mean that some of these items could be slow to arrive, for both the U.S. and Ukraine.

Ukrainian President Volodymyr Zelenskyy and Oleksii Reznikov, the nation’s defense minister, both said on Wednesday that the Ukrainian government is grateful for the $3 billion aid package.

“The people of Ukraine, all our defenders highly appreciate [the U.S.’s] unwavering support. Together we will win!” Zelenskyy tweeted.

The Ukraine Security Assistance Initiative, which is the Pentagon-managed account the administration drew the latest assistance package from, has been the primary method of arming and equipping Ukraine’s military since the 2014 seizure of Crimea by Russian forces.

Though lawmakers have typically provided several hundred million dollars annually, Congress supersized the account after Russia’s full invasion this winter. The emergency supplemental package became law in May. The legislation allocated $6 billion to the program, placing it on par with other special programs to beef up U.S. military posture and training in Eastern Europe and the Indo-Pacific region.

In all, Congress has set aside $6.3 billion for the Pentagon-administered effort: $6 billion as part of May’s $40 billion supplemental assistance legislation and $300 million in a government-wide funding package that passed in March. As of Aug. 1, just $1.8 billion of that cash had been used, according to Pentagon documentation seen by POLITICO. Wednesday’s announcement leaves roughly $1.5 billion left to be spent.

The Pentagon will hand over the remaining aid as part of a flurry of contract awards at the end of the fiscal year, said two people with knowledge of the discussions.

Sen. Jeanne Shaheen (D-N.H.), a longtime proponent of boosting military aid to Ukraine, said the multibillion-dollar tranche shows an extended U.S. commitment to Kyiv as the war grinds on. “This new assistance package demonstrates U.S. commitment to Ukraine’s long-term security by investing in capabilities to bolster Ukraine’s defense posture for years to come,” Shaheen said in a statement. “The equipment included in this package, and the associated training of Ukrainian forces, will facilitate the continued strengthening of the Ukrainian military as they defend themselves from Putin’s aggression.”

The $40 billion military and humanitarian aid package was intended to last at least through the fall.

The package includes $19 billion for immediate military support to Ukraine, $3.9 billion to sustain U.S. forces deployed to Europe and $2 billion for long-term support of NATO allies and U.S. modernization programs. That military support includes the $6 billion for the Pentagon account to arm Ukraine as well as $4 billion in State Department foreign military financing for Ukraine and other NATO countries on the alliance’s eastern edge. And roughly $9 billion will be parceled out by the Pentagon for the defense industry to replenish stores of missiles and other weapons and equipment shipped to Ukraine.

Once it’s empty, further emergency funding would be required later in the year, though whether that will happen is unclear.

The uncertain political landscape in the U.S., where funding for another large Ukraine package might run into trouble on Capitol Hill, makes these long-term contracts even more important to put Ukraine on solid footing, proponents say.

Still more money is on the way, regardless of whether President Joe Biden seeks another supplemental. Both the House and Senate Appropriations committees have proposed granting the Pentagon another $300 million for the Ukraine Security Assistance Initiative for fiscal 2023.

A final deal to fund the federal government, including the military, likely won’t be struck until late this year or early next, however, and the added Ukraine money could increase if lawmakers agree to give the Pentagon even more money.

Also included in the $40 billion supplemental was a provision to help NATO front line states Latvia, Estonia and Lithuania refill their arsenals after donating around $600 million worth of equipment to Ukraine this year.

The State Department is expected to send Congress its plan for how to spend over $150 million in replenishment contracts by the end of the month, one European diplomat told POLITICO. The U.S. will spend the money in much the same way as the Ukraine package — awarding contracts to the U.S. defense industry to make weapons for the allies.

All three Baltic states sent hundreds of their Javelin and Stinger missiles at the start of the war, along with howitzers, small arms, communications equipment and mortars, and are eager to replenish their stocks. The trio has also come out forcefully in favor of cutting off Russian energy imports to Europe and banning tourist visas for Russian citizens, moves that have put them in the Kremlin’s crosshairs.

The U.S. pledged the three nations $180 million in military aid as part of the Baltic Security Initiative in the 2022 federal budget, an increase of $10 million over the 2021 package.

The U.S. has also pledged $64.5 million to help Estonia acquire the High Mobility Artillery Rocket System that has proved so effective against Russian forces in Ukraine; in July, Congress approved the sale of six HIMARS to Estonia.

Alexander Ward contributed to this report.