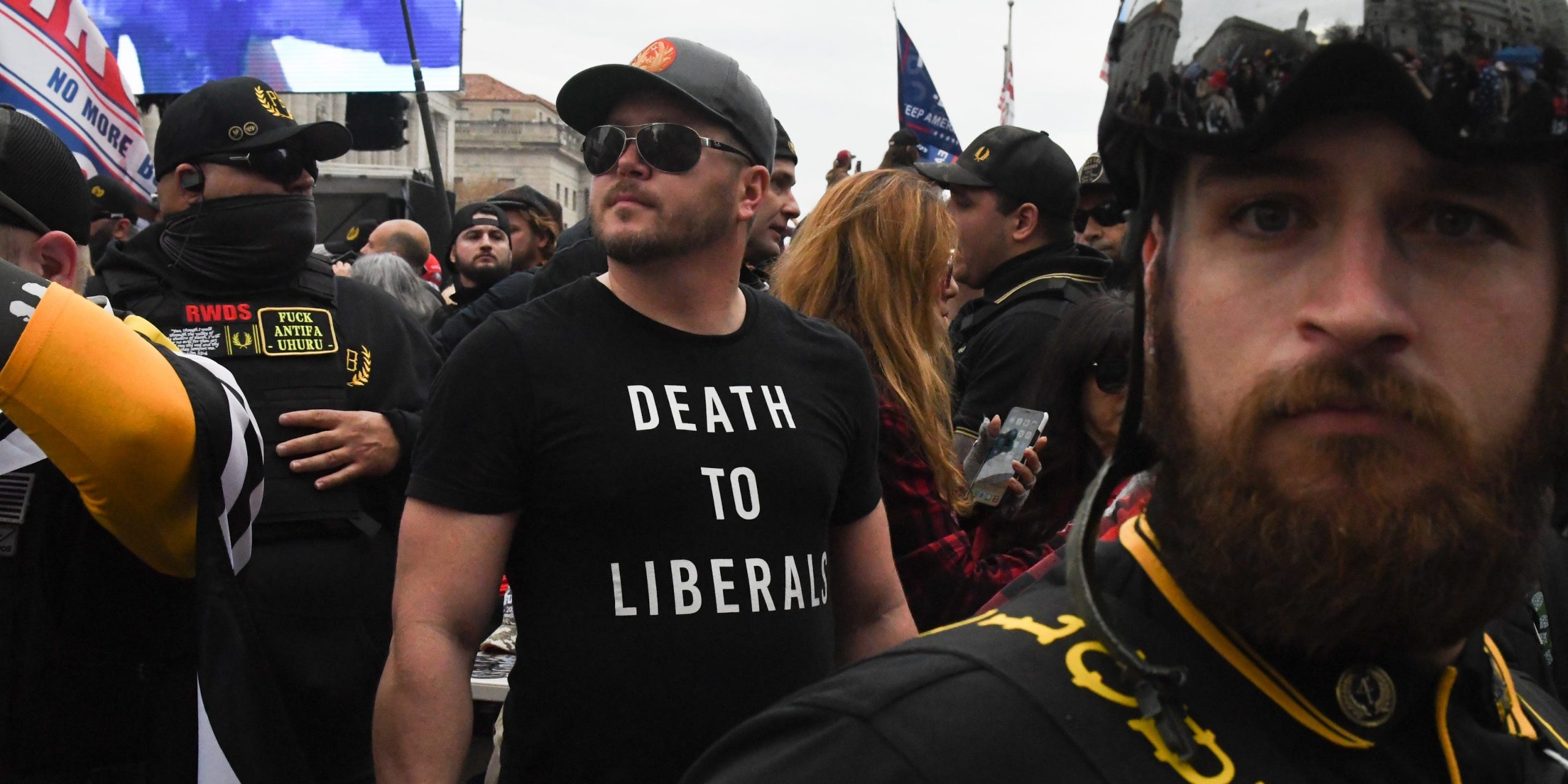 A member of the Proud Boys wearing a t-shirt that reads “death to liberals” stands with other Proud Boys in Freedom Plaza during a protest on December 12, 2020 in Washington, DC.

When members of a far-right extremist group clashed with anti-fascist activists in the streets of New York City, the occasion was an event celebrating the assassination of a Japanese politician.

The year was 2018 and the Proud Boys, an American paramilitary group founded by a Canadian, Gavin McInnes, were reenacting the 1960 killing of Inejirō Asanuma, the leader of Japan’s Socialist Party. Asanuma’s killer: Otoya Yamaguchi, an ultra-right teenager murdered the leftist politician with a sword on live television, stabbing him at a rally in Tokyo in a scene captured in a Pulitzer Prize-winning photo.

“What a great icon, what a great hero!” McInnes said on a podcast afterward, as noted by Cassie Miller, a senior research analyst at the Southern Poverty Law Center.

Yamaguchi, 17, was a member of the ultranationalist Great Japan Patriotic Party. He later died by suicide in prison.

Prior to the murder of former Prime Minister Shinzo Abe, himself a member of a conservative party and described as a nationalist, the assassination of Japan’s leading socialist was the most infamous example of post-war political violence in the island nation. With reports suggesting that Abe’s killer was motivated not by political ideology but personal grievance, it’s also likely to remain the most influential, at least abroad, where a photogenic assassin serves as a romantic ideal for right-wing violence.

At the time, the administration of President Dwight D. Eisenhower joined China and the Soviet Union in denouncing the killing, labeling it “senseless” and “deplorable.” Few, whatever their take on socialism or communism, would have thought to openly defend the legitimacy of murder as political praxis. A contemporary report from The Guardian noted American fears that the killing would indeed make the deceased target a martyr, boosting his brand of working-class politics.

But in the decades since, it is Yamaguchi, not his victim, who has become both a legend and a meme, with some members of the American far-right portraying his murder of an unarmed man as an act of heroism.

Seventeen-year-old Otoya Yamaguchi uses a foot-long sword to kill Japan Socialist Party leader Asanuma Inajiro, on a public stage in Tokyo. Yamaguchi was upset with Asanuma’s support of a U.S.-Japan mutual defense treaty. The creator of this photograph, Yasushi Nagao, was the first non-American photographer to win a Pulitzer Prize.

‘Based Otoya’ and the killing of Shinzo Abe

“The far right have a fondness for Yamaguchi because they view his heinous act, caught on camera, as a kind of ‘in-your-face’ traditionalist attack on the modern world that successfully defeated socialism in Japan,” Alexander Reid Ross, a doctoral fellow at the Center for the Analysis of the Radical Right, told Insider.

It’s a theme you’ll find in the dark corners of the far-right internet: that Yamaguchi’s violence was as righteous as it was stylish.

In a forum for supporters of former President Donald Trump, The Donald, a popular post marked the October 12 anniversary of Asanuma’s murder as “Otoya Yamaguchi day,” receiving hundreds of comments commemorating the assassination. As the post argued, the killing meant “communism never had a chance to take root in any meaningful way in Japan.”

On another far-right discussion board, supporters of Kyle Rittenhouse, the teenager acquitted of murder after fatally shooting two men during civil unrest in Kenosha, Wisconsin, favorably compared him to an assassin.

“Kyle reminds me of Otoya Yamaguchi. He killed commie scum at the age of 17 as well,” one user posted.

The Otoya cult and Trumpworld collide

The cult of personality has also been embraced by those who imagine themselves the intellectual titans of the “Make America Great Again” movement.

Matt Braynard, who worked on Donald Trump’s 2016 campaign and last year organized a rally for January 6 defendants, was so enamored with Yamaguchi that he started a magazine and named it after him: “Otoya: A Literary Journal of the New Nationalism.”

“Our theme comes from President Trump’s first inaugural address: ‘Through loyalty to country we will rediscover loyalty to each other,'” states the magazine’s description on Amazon, in which the assassin is described as a “Japanese patriot.”

T-shirts with Yamaguchi’s face on them are also available for purchase at the online retailer. “Never let evil take root,” states one item depicting the killer with a sword, using a phrase that his followers use on social media to slyly endorse using lethal means to achieve their ends.

At a right-wing conference hosted at the Trump National Doral Golf Club in 2019, featuring the likes of Donald Trump Jr. and Sarah Sanders, reporter Alice Wilder spotted attendees wearing such clothing in the wild.

“One of the shirts read, ‘Yamaguchi did nothing wrong,'” Wilder wrote for WNYC and ProPublica. The back, she noted, “shows an image of the killing.”

For most, the support for a Japanese assassin will never extend beyond posting on the internet. But with the majority of terror incidents in the United States carried out by far-right extremists — and congressional investigators pointing to coordination between paramilitary groups such as the Proud Boys and the highest echelons of power in an attempted coup d’etat — the explicit endorsement of political violence cannot be dismissed as just losers blowing off steam online.