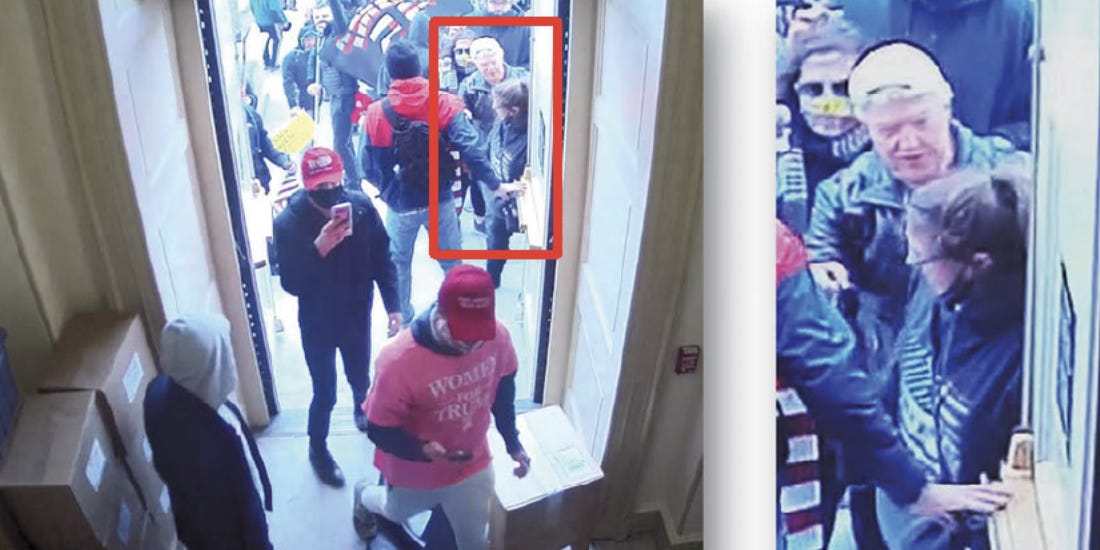 The Department of Justice

One of the oldest known defendants charged in the January 6 Capitol riot was sentenced to three years of probation this week, months after an acquaintance reported him to the FBI for his participation in the insurrection.

Gary Wickersham, an 81-year-old Pennsylvania Army veteran, was also ordered to pay a $2,000 fine and $500 in restitution for his role in the attack.

Judge Royce Lamberth, 78, at the Tuesday hearing, commented on Wickersham’s age, saying he is “the first defendant I’ve had that’s older than me in quite some time,” according to CNN.

During the hearing, Wickersham acknowledged and apologized for his participation in the siege.

“It’s not like me to do that,” Wickersham said, according to The Philadelphia Inquirer. “In my whole 81 years, that 22 minutes I spent in there, it was a dark blot … I regret doing it. I shouldn’t have been in there.”

Lamberth commended Wickersham for his contrition, telling the defendant he would “get some credit” for admitting his faults. But on top of the probationary punishment, the judge also sentenced Wickersham to 90 days of home confinement.

An attorney for Wickersham had previously argued against any home detention, telling the judge doing so would inhibit Wickersham from being able to visit his grandkids during his “golden years,” CNN reported.

Prosecutors were first alerted to Wickersham’s presence at the Capitol on January 6 when an anonymous source brought forth a text message Wickersham had sent to a different acquaintance claiming to be inside the Capitol, according to charging documents.

When investigators first interviewed Wickersham about his participation in the attack, the Army veteran appeared to show little remorse, telling FBI agents he believed the riot was full of “antifa” protesters aiming to make Trump supporters look bad. Wickersham also alleged that Capitol Police officers were purposefully unprepared to allow the rioters to easily storm the Capitol and be arrested, according to charging documents.

Wickersham told investigators he stayed inside the Capitol for about 22 minutes and initially argued that he was able to do so because he paid US taxes, according to prosecutors. During Tuesday’s hearing, Wickersham’s attorney said his client’s comments were poor phrasing, The Inquirer reported.

“I regret doing it, I shouldn’t be in there. I think the remarks I made that it was public property, I don’t remember if I said that or not, I still shouldn’t have been in there,” Wickersham reportedly said during the hearing.

Michael Noone, an attorney for Wickersham, told Insider that his client respects the sentence and is very sorry for his conduct.

“Mr. Wickersham expressed his genuine remorse and accepted responsibility for his actions,” Noone said.

Nearly 730 people have been charged in connection to the Capitol riot so far, and more than 150 people have pleaded guilty.