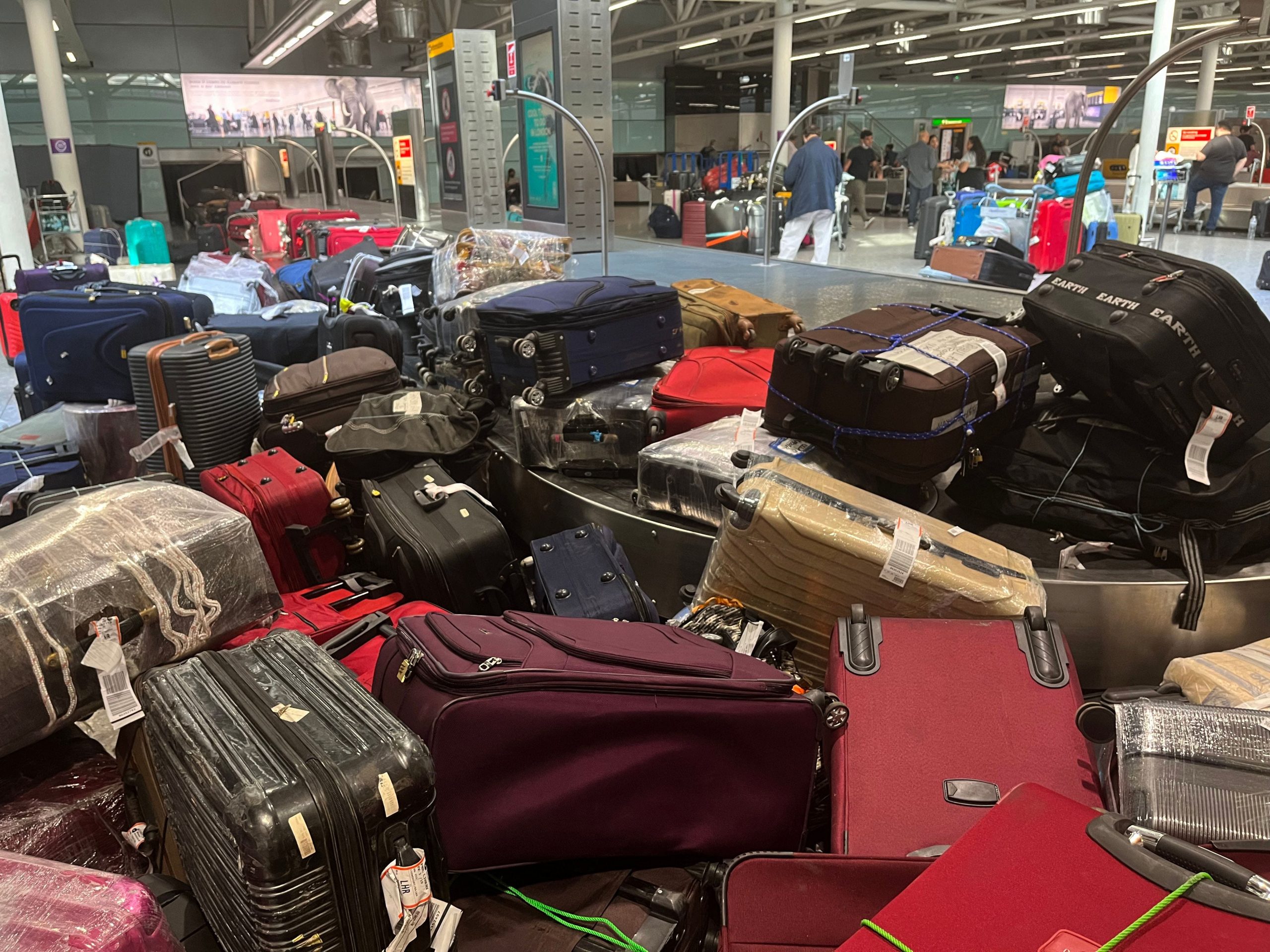 Unclaimed luggage piles up at London Heathrow Airport on July 8, 2022.

The day after he got home from a trip to Europe, North Carolina native Jamie O’Grady got a text from a stranger saying he’d just found his missing luggage lying in baggage reclaim at London Heathrow.

Speaking to Insider, O’Grady said he told American Airlines about the text, only for the airline to ask him to collect the bag himself, even though he was 4,000 miles away.

O’Grady flew from Faro, Portugal on July 9 and arrived in Raleigh, North Carolina the next day following a layover at Heathrow. He’d booked the flights through American Airlines, though the first leg of the flight appears to have been operated as a codeshare with Finnair.

O’Grady dropped off two bags when he checked in at Faro — one with general luggage and the other with his golf clubs.

He told Insider that he waited an hour at the luggage carousel at Raleigh-Durham International Airport for his bags, but they never showed up. Staff at the American Airlines desk then told O’Grady that his bags had never actually been scanned and they were unsure where they were.

Earlier, as he walked around Heathrow, O’Grady had been “floored” by how much baggage was left unclaimed at the airport, and feared he’d face the same fate.

“I was just completely floored by how much luggage was in that baggage claim area. I thought to myself: ‘I’m not super confident that my bags will even be transferred behind the scenes for tomorrow’s flight.’

“And lo and behold, when I got back, they did not make it here,” he said.

O’Grady said that he was on a flight with around 30 of his colleagues, none of whom lost their bags. But O’Grady lost both of his.

The morning after he returned to the US, he got a text from a stranger, saying that he’d stumbled across his golf bag at baggage reclaim in Heathrow. The passenger had reached out after noticing that O’Grady had the same area code as him.

“My bag never should have been on those carousels,” O’Grady told Insider. “It should have remained behind the scenes and transferred.”

O’Grady sent screenshots of the conversation to American Airlines’ customer services and told the company that his bag was evidently still at Heathrow.

“We suggest that you head down to the airport to have this sorted out ASAP,” the airline replied in screenshots that O’Grady shared on Twitter. Heathrow is around 4,000 miles away from Raleigh.

In April, roughly one in every 140 bags on flights operated by American Airlines or its branded codeshare partners were mishandled, according to a report by the US Department of Transport.

O’Grady told Insider that American Airlines flew one bag into Raleigh two days after he got in. He picked up the bag from the airport himself, telling Insider that he “didn’t trust” the airline to deliver his bag to his address.

O’Grady didn’t get his golf bag back until late on July 15, he said — almost a week after he departed from Faro. The whole experience was “frustrating,” he said.

Passengers have faced mounting travel chaos as a combination of understaffing and soaring demand for travel mean that airlines and airports are delaying and canceling thousands of flights, losing luggage, and facing huge lines for check-in and security.

O’Grady said that during his layover at Heathrow he exited the airport and it took him around two and a half hours to get through security upon his reentry.

“I’ve traveled all around the world,” he said. “I’ve never seen anything like this.”