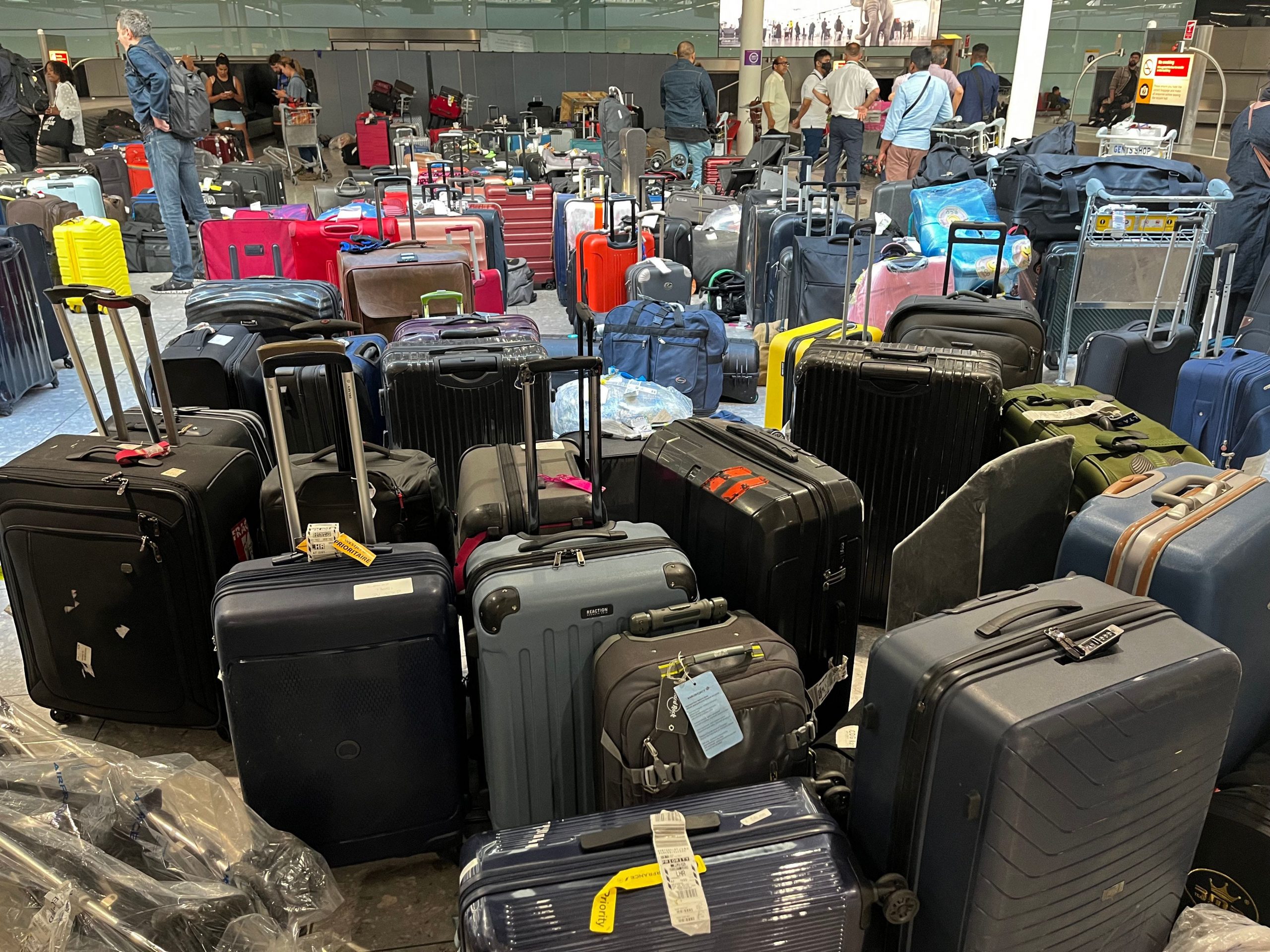 Unclaimed luggage piles up at London Heathrow Airport on July 8, 2022.

An airline passenger who lost her wedding dress amid the chaos enveloping airports worldwide said she is “terrified” she won’t get the “priceless” items back.

Latrice Rubenstein got married in Portugal in late June, before flying on June 29 from Lisbon to Dublin via Frankfurt. She said she booked the flight, which was operated by Lufthansa, via Air Canada, which is a code share partner with the German airline.

During the journey, her luggage went missing, she told Insider, forcing her to buy new clothes and essentials for her honeymoon in Ireland.

She told Insider that after landing in Dublin, an announcement was made on the plane that none of the bags had made it to the Irish capital city, adding that a flight attendant informed the passengers that this had been “happening daily.”

The missing bags included her wedding dress and jewellery as well as other items from the event, including speakers. Rubenstein and her husband also had a sand ceremony at their wedding — a symbol of marital unity — with the vessel of sand also lost.

The total monetary value of the bag was at least $10,000, she told Insider, but in sentimental terms the items were “priceless.”

“My husband left his medicine in the bag, so I was a little concerned about that because he has some health issues like his asthma,” she told Insider.

Rubenstein said there was a “sea of luggage” at Dublin Airport when she arrived. She told Insider that she has contacted both Lufthansa and Air Canada, but is often put on hold for “hours on end” and feels like she is going in circles.

“I just don’t seem to get anywhere,” she said.

In a statement, Air Canada said: “The global air transport industry is currently challenged due to issues with airports and third-party providers of such services as passenger screening, customs, and air navigation. We are working hard with these partners and governments to resolve these issues as they are affecting the performance of airlines.”

It also noted that it did not operate the flight on which Rubenstein’s luggage was lost. Latrice Rubenstein said there was a “sea of luggage” at Dublin Airport when she arrived.

Rubenstein is only one of a string of passengers who have had their baggage lost this summer amid chaotic scenes at airports around the world.

Her maid of honor, Cynthia, also saw her luggage go missing on a different flight from Portugal to San Diego via London Heathrow and Toronto on the same day.

Cynthia was only able to locate one of her bags buried among others at San Diego’s baggage claim since she tagged it with an Apple AirTag.

After her final flight from Toronto to San Diego was cancelled, Cynthia said she tracked the bag and located it in Toronto before it was sent to San Diego the following day.

She later travelled to the airport and pointed airport staff to the location of the bag after they claimed it wasn’t there, she told Insider.

“Clearly, the woman I talked to talk to somebody who found that bag because I was sitting there saying: ‘I can see this here with the Apple AirTag.'”

Cynthia said her untagged carry-on bag, which she checked in before the first flight, was still missing.

“It is very frustrating,” she said. “But I am staying optimistic.”

Both airlines and airports are struggling to cope with surging passenger numbers and rising amounts of baggage as a result of lingering pandemic-era staff shortages.

A number of airlines have also been forced to cut down their summer flight schedules to avoid disruptions.

Airlines across Europe, the UK, and the US including Delta, Lufthansa, and British Airways, have all made cuts to their summer schedules.

On Tuesday, London Heathrow, one of the Europe’s busiestt airports and a key global aviation hub, asked airlines to stop selling tickets for the rest of the summer to avoid chaotic scenes at the airport. The airport is now implementing limits of 100,000 passengers per day for the remainder of the summer period.