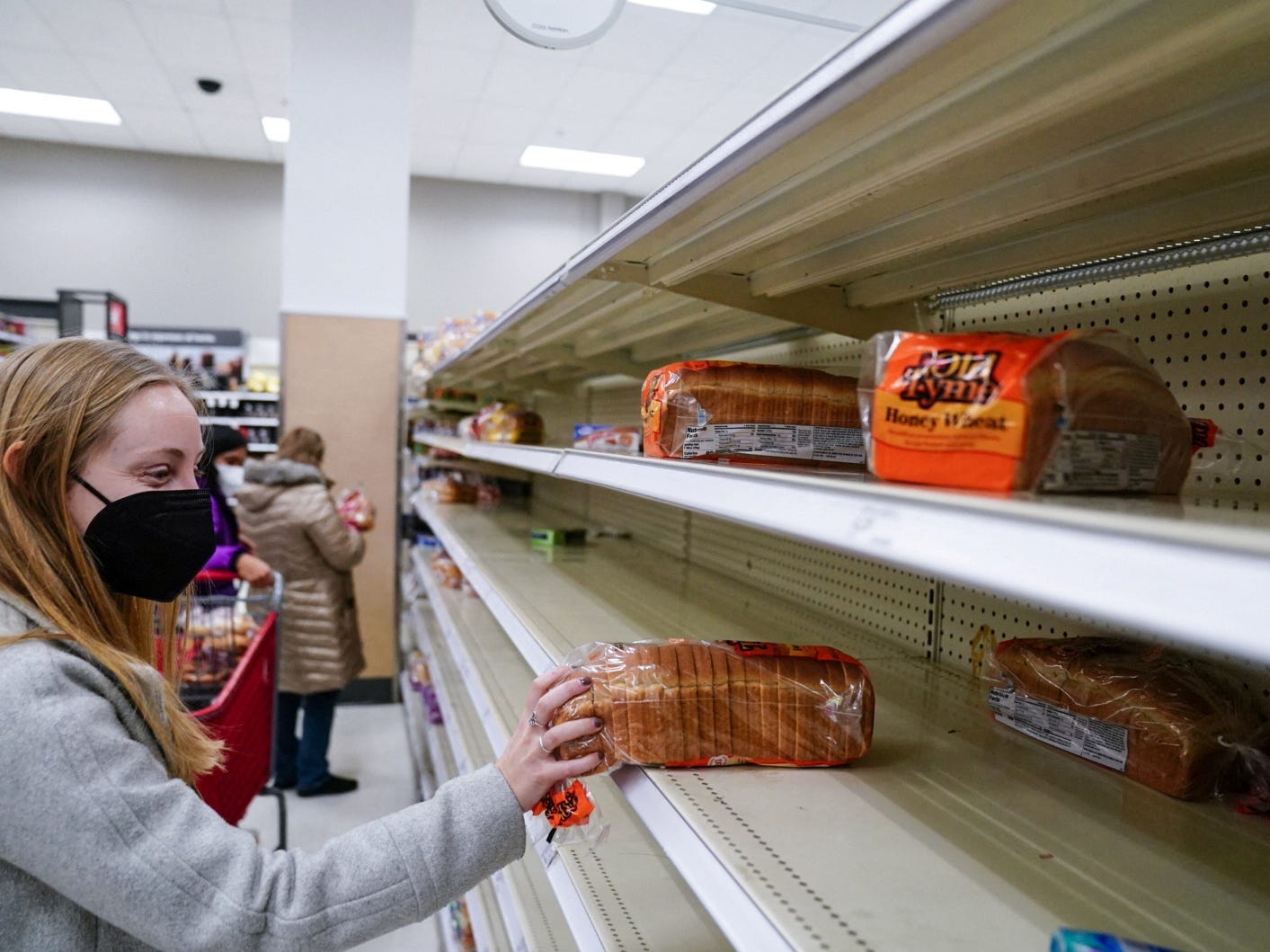 Bread aisle shelves at a Target are seen nearly empty as the U.S. continues to experience supply chain disruptions in Washington, U.S.

January’s been a wild month, and it’s only half over.

The spread of Omicron infections across the world is causing millions of Americans to isolate again like it’s 2020. Workers are staying home sick, and others are continuing to avoid the workforce for fear of the virus. Meanwhile consumers are paying the highest prices in almost 40 years.

It’s a situation unlike any we’ve seen before, and it’s about to get wilder.

The worst inflation since 1982 may ease, confusing Americans’ budgets once again

After living with historic inflation for the better part of a whole year, Americans have demanded bigger raises and businesses have struggled to keep goods in stock. Yet that normal is on its way out, and inflation is now likely to start cooling.

The latest data show inflation was still hot during the last days of 2021. Prices surged 7% year-over-year in December, according to a Wednesday report, reflecting the strongest inflation since 1982.

However, there’s reason to believe price growth will start to slow in January. For one, Wall Street banks’ forecasts show inflation peaking in the fourth quarter of 2021. The Biden administration and the Federal Reserve have said they expect inflation to fall from elevated levels by the middle of this year. Even everyday Americans’ inflation expectations softened in December after skyrocketing through most of the pandemic.

Much of the improvement will come from the solving of the global supply-chain mess. Bottlenecks are “easing in all the right places” as global suppliers ramp up production, JPMorgan economists Joshua Lupton and Bruce Kasman said in a Tuesday note.

Businesses have empty shelves and not enough workers

As Omicron peaks, service may be slower at understaffed stores this month. Or, if companies have resumed pre-pandemic practices, employees at your local restaurant or grocery store might be working with COVID.

Many companies started rolling back pandemic-era sick leave policies as vaccines have become available throughout the US. Omicron, however, evades vaccine protection more than previous variants.

A Harvard study in 2020 found that nearly 1.5 million grocery workers across 24 grocery chains, including Walmart, Kroger, and Target, lacked access to paid sick leave. Low-income workers are especially affected. Only one third of workers whose wages are at the bottom 10% get any paid sick leave at all, compared with 95% of workers with wages in the top 10%, according to a national compensation survey of employee benefits conducted by the U.S. Bureau of Labor Statistics in March.

Omicron has also been wreaking havoc on the supply chain, which was already why grocery stores have been struggling to keep food on the shelves. And with the labor shortage still going strong, there are fewer hands to do work on farms, for manufacturers, and for distributors. Even food inspectors have been calling in sick, Bloomberg reported last week.

Flights and public transportation will be harder to catch

Airlines have been hit hard, with hundreds of flights being canceled every day. United Airlines decreased its number of flights after 3,000 workers, about 4% of United’s workforce, tested positive for COVID. JetBlue Airways also reduced its schedule this week, by about 1,280 flights — roughly 10% of its schedule — because of crew members getting sick.

Local forms of transit are slowing down for the same reason. Cities like Portland, Oregon, Atlanta, Georgia, and Washington, D.C., are decreasing their mass transit services as their employees get sick with COVID. The New York Times reported that in New York City, more than a fifth of subway operators and conductors were absent from work. In Florida, school bus drivers are unable to drive students to school.

And, the mail is delayed throughout the country

Although the United States Postal Service (USPS) largely got people their deliveries on time for the holiday season, the Omicron variant has been spreading amongst its employees. Roughly 6,500 postal workers were quarantined due to COVID-19 as of Christmas Eve, a number that grew to 8,000, the Associated Press reported. The USPS declined to comment on the existence of positive employee COVID-19 cases.

Cities and states across the country have been reporting mail delays in response, such as Minnesota, The StarTribune reporting that garbage haulers have been out sick too. In Washington state, winter weather conditions compounded with a surge in cases among postal workers to cause delays. In Maine, some people haven’t gotten mail delivered in weeks, which the USPS attributed to the spread of COVID-19.

“This is an incredibly tough moment. The omicron variant has taken off like wildfire,” Los Angeles Mayor Eric Garcetti said during a news conference last week, commenting on firefighter and ambulance delays.